RockShowTrader.com has uploaded video footage of SLAYER's April 26 performance at the Civic Theatre in New Orleans, Lousiana. Check it out below.

SLAYER — bassist/vocalist Tom Araya, guitarist Kerry King, and returning drummer Paul Bostaph, along with touring guitarist Gary Holt and producer Terry Date — has completed recording its eleventh studio album and the band's first new effort since 2009's Grammy-nominated "World Painted Blood". The CD is expected out later this year, and will be released on SLAYER's own as-yet-unnamed label through Nuclear Blast.

Following SLAYER's studio sessions in March 2014 that yielded the track "Implode", offered by the band as a free download, SLAYER recorded on and off between September and mid-January at L.A.'s Henson Studios, and has just finished mixing the album. Eleven songs have been recorded, but what will end up on the final track listing is yet to be determined.

The new album marks the first time SLAYER has worked with producer Terry Date (PANTERA, SOUNDGARDEN, DEFTONES). It is also SLAYER's first CD since drummer Paul Bostaph's return to the band in 2013 and Holt's addition to the SLAYER touring lineup in 2011. It's also the firstSLAYER album without the presence of founding guitarist Jeff Hanneman, although a Hanneman-penned song is on the final track listing.

According to Araya, "Jeff had always been writing and demoing songs, even up until shortly before he passed. You can tell by the quality of his songwriting that this was his passion. There will be a song written by Jeff on the new album. Everything but the vocals had been completed, so we did the vocals and it's done. And there are a few more of Jeff's songs that we might record and release in the future."

"With this new album," added King, "Tom, Paul and I put all of our ideas out on to the table, working in a more collaborative way toward the ultimate heavy outcome. And I've got to give big props to Gary, who played lead on several of the new songs. I think he got all of his leads done in one day — he's a maniac!" 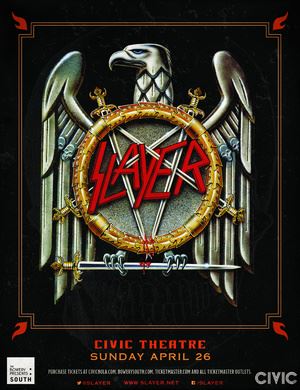