MOTÖRHEAD's Motörboat will embark on its second voyage September 28 through October 2, 2015 on Norwegian Sky, departing Port Miami, with stops in Nassau and the private picturesque island of Great Stirrup Cay in The Bahamas. The Loudest Boat In The World will feature performances from some of the greatest heavy rock bands in the world, including SLAYER, MOTÖRHEAD, ANTHRAX, SUICIDAL TENDENCIES, HATEBREED, EXODUS, CROBOT, PHIL CAMPBELL'S ALL STARR BAND, MOTOR SISTER, KYNG, FIREBALL MINISTRY, HUNTRESS, and more.

Motörboat offers guests a once-in-a-lifetime opportunity to share an experience with their favorite bands and to see unforgettable performances on various stages throughout the ship and on the island of Great Stirrup Cay.

MOTÖRHEAD founder Lemmy Kilmister says, "And so the Motörboat sets sail one more time. Better get your tickets now, or be left sobbing on the dock! Oh — and we promise not to run out of beer this time!"

SLAYER's Kerry King says: "SLAYER is crashing the Motörboat party!! I, personally, will be keeping the bar in business. Hell will be coming with us. Light it up!!!"

2015 marks the first excursion on Norwegian Sky for Motörboat. The contemporary ship offers 13 complimentary and specialty dining options, 12 bars and lounges, a coffee bar, an outdoor pool, and five hot tubs. While onboard, guests can try their luck in the Sky Club Casino, relax in the onboard spa and get their heart pumping in the fitness center or full basketball court.

For the debut Motörboat cruise in 2014, an international, multigenerational audience from over 30 countries came together to celebrate the legacy of the cruise's iconic namesake and escape into five days of true rock 'n' roll living with no holds barred. Highlighted by a pair of ear-splitting performances from MOTÖRHEAD themselves, Motörboat 2014 featured more than 30 performances by 15 of rock and metal's top artists, including heavy metal all-star band METAL ALLEGIANCE, ANTHRAX, TESTAMENT, DOWN and Zakk Wylde. 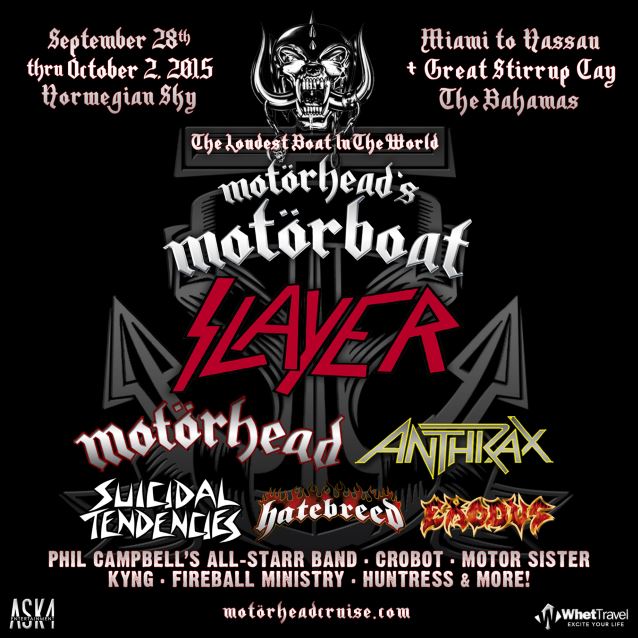