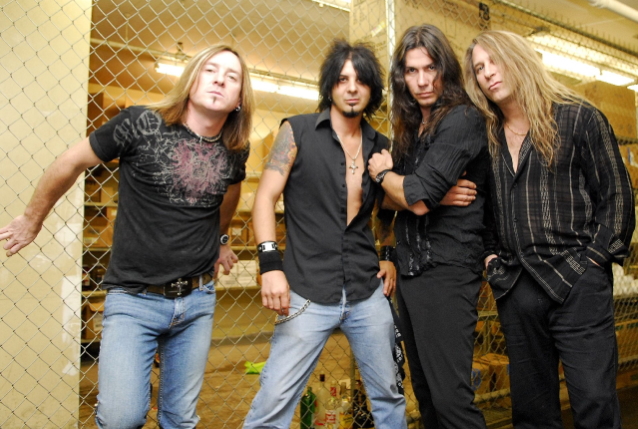 SLAUGHTER frontman Mark Slaughter recently spoke with Rockin' Metal Revival. The full conversation can be streamed below. A few excerpts follow (as transcribed by BLABBERMOUTH.NET).

Mark: "We're out still playing and sending out the good message of, 'Long live rock n' roll'... The bottom line is, we still go out there aggressively and play those songs as people know them, and we really enjoy playing live. I think that's one of the things that this band is known for since the very beginning. We never stoppped — we've been touring all these 29 years at this point, and every year, we've been out doing shows. It's a love of ours... Our whole thing is the party and the nostalgia and the good times we've all had."

Mark: "It's great. We've been doing it since about 2001. The only unfortunate part of it is [that] certain parts of the country, you don't make it to unless there's really good venues or casinos or fairs that support that. That's the only bad part of it, but the good part of is [that] we go kick ass on the weekends and fly home and have pretty much a normal life and go back out and fly out and do shows again the next weekend."

Mark: "I'm going to continue to keep making music. As we all know, it's not like it was when we were kids, where there's albums and you looked at the covers and you were waiting for every release. It's a different time for music, [but] artists still make art, and I think that's really where I'm at. I'm going to keep doing what I love because it's what I love."

On the digital emphasis of the modern music industry:

Mark: "It does make it easier in one way, but it's hard to educate people, because the attention span for anybody is much less. If you look at any commercials on television, it's just a nanosecond of image that we can actualy assimilate, so we make a decision on a very, very quick basis. We don't just get a chance to listen to the radio when we're going down to the lake. All that music was a part of our lives, and that's where the nostalgia comes from. Kids nowadays, they really don't have that side of new music to fit them all the time, so a lot of the classic stuff is still living on."

On performing at Alpine Valley Music Theatre in East Troy, Wisconsin one month after the 1990 death of noted blues guitarist Stevie Ray Vaughan:

Mark: "That was probably one of those magic moments that I always reflect back to, because everybody was in it — everybody was emotionally in it, and everybody was so saddened by the loss of this incredible guitar player. It happened at that venue. We're playing on stage, and next to us on the hillside is a charred hill where the grass has been burned from the helicopter crash. It was a very moving thing."

Mark: "It's a lot of fun. It seems like you go on a cruise to relax, but you find yourself running from one bandstand to the other. You're on deck watching a band, and then you go into the theater and there's a band, and you go to the back bar area and there's a band over there. Music is everywhere — you're just trying to run around and see all your friends and your favorite bands play the hits. It's a lot of fun — it's a blast."

On whether the group plans to release a 30th-anniversary reissue of its debut album, 1990's "Stick It To Ya":

Mark: "We're talking to what's left of the label [about] what we're going to do, if anything. Labels as we knew them are kind of dissolved. There's not really much [left]. Basically, you're dealing with accountants more than you are with anybody who's musically [inclined] or trying to promote music. It's a different thing... I'm sure we'll do something. I'm not sure exactly what we're going to do — there's no plans right now — but that doesn't mean we're not going to."

SLAUGHTER formed in 1988 from the ashes of lead vocalist Slaughter and bassist Dana Strum's previous band, VINNIE VINCENT INVASION, which featured former KISS guitarist Vinnie Vincent. The group's double-platinum 1990 debut, "Stick It To Ya", featured the hit singles "Fly To The Angels", "Up All Night", "Mad About You" and "Spend My Life". The band issued four additional full-length albums over the course of the rest of the decade, but it has not released any new music since 1999's "Back To Reality".