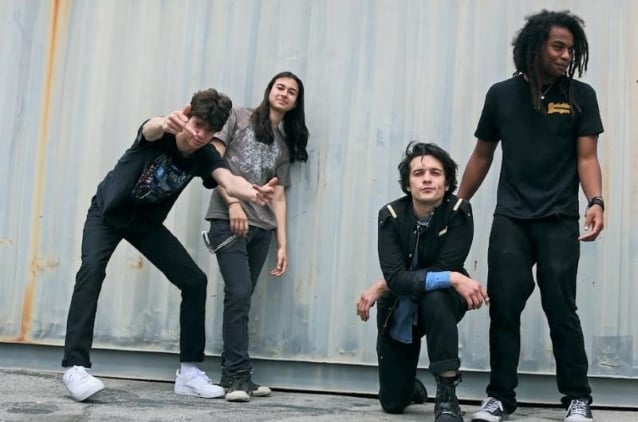 Following their live debut this summer, rock 'n' roll upstarts CLASSLESS ACT have announced they will be supporting SLASH FEATURING MYLES KENNEDY AND THE CONSPIRATORS at the Hollywood Palladium on Tuesday, October 16. The show will mark the first time the band's co-founder and drummer, 16-year-old London Hudson, will share the stage with his dad, Slash.

"Growing up here in Los Angeles, we've always heard about so many amazing shows at the legendary Palladium," says London. "We've all dreamed that we'd get to play on this stage one day, so this show will truly be a dream come true for us," adds singer Derek Day.

Founded in 2016 by childhood friends Hudson and Nico Tsangaris (16, lead guitar), the Southern California band — rounded out by Day (23, lead vocals) and Dane Pieper (20, rhythm guitar) — is off to an incredible start. CLASSLESS ACT performed twice this summer at the famed Whisky A Go Go on the Sunset Strip, following its first-ever live show at the "Ride For Ronnie" annual charity event on May 6, among other appearances, earning rave reviews along the way.

Armed with songs like "Pass The Medicine", "Goddamn Devil", "Classless Act" and "Madhouse", CLASSLESS ACT stand sready to carve out a legacy of its own. Calling Hollywood home, this group certainly has a swagger and deep history of music coursing through its DNA. Aimed to plant their own flag, London suggested to childhood buddy Nico they launch a band in 2016. Together, they rallied around a shared "sole purpose of creating kickass rock 'n' roll." As London and Nico wrote countless songs, the boys invited Dane and Derek into the fold as the band's identity solidified inspired by QUEEN, LED ZEPPELIN, AEROSMITH, AC/DC, MOTÖRHEAD and, of course, GUNS N' ROSES.