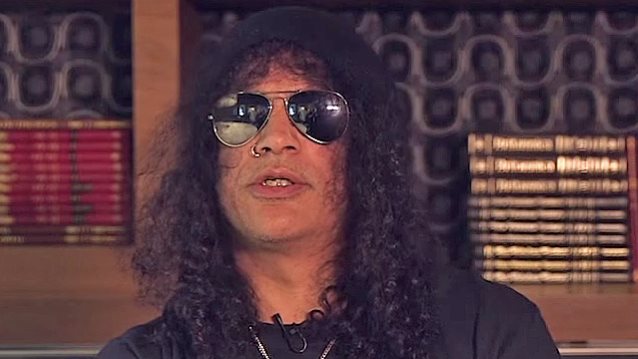 Slash — the iconic American rock guitarist, songwriter and film producer — spoke to RollingStone.com about the inspiration for his new song and video, "Beneath The Savage Sun". Check out the chat below.

Slash has partnered with International Fund for Animal Welfare (IFAW) to raise awareness of the slaughter of elephants which is leading to their early extinction.

While on tour in South Africa, Slash and the lead singer of his band, Myles Kennedy, witnessed the devastation of the elephants first-hand and knew they had to act.

"Myles and I went to South Africa a couple of years ago to do some shows and ended up spending roughly the better part of maybe two weeks there," Slash said. "We did a lot going out and seeing a lot of wildlife and whatnot. And when you're there, you get a real feel for how majestic the elephants are and then you learn about the details of what's going on with the poaching there. So [Myles] wrote some really poignant lyrics, written from the elephant's point of view about the death of one of his own comrades. And so when we got back to Los Angeles, we got together and came up with this song, and I thought it would be really great if we could put the music to footage of what's happening with the elephants currently and try and help to raise more awareness — especially in the U.S., but, I mean, globally. 'Cause I don't think a lot of people really know what's going on. I think a lot of people don't know that every time they purchase anything that has even a smidgen of ivory in it, it comes from a dead elephant; that's how they get it. And I think if people were more aware of that, it would have a dramatic effect on the whole ivory trade, because we're one of the biggest ivory customers on the planet."

IFAW's CEO Azzedine Downes expressed gratitude to Slash and Myles Kennedy for calling attention to the current elephant poaching crisis, "To save elephants from this senseless slaughter, we need everyone to stand up and demand stronger protection and we need to help fund action on the ground in Africa and Asia. We are grateful to Slash, Myles Kennedy and THE CONSPIRATORS for reaching out to their fans to share this important message."

Slash and his band FEATURING MYLES KENNEDY AND THE CONSPIRATORS are currently in the midst of a U.S. headlining tour. The month-long trek — encompassing headlining shows and festival appearances — is the first solo trek supporting the group's acclaimed studio album, "World On Fire", which is Slash's third straight solo album to debut in the Top Ten in the U.S and the second album with his official band THE CONSPIRATORS which features Kennedy (vocals), Brent Fitz (drums), Todd Kerns (bass) and Frank Sidoris (touring guitarist).