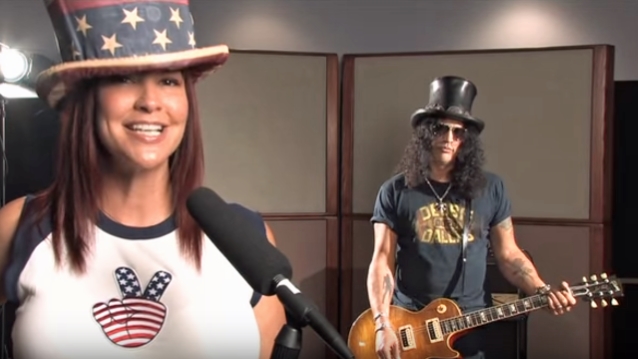 Slash's wife of 17 years, Perla Hudson, has opened up about her divorce from the GUNS N' ROSES guitarist, saying that she misses her "best friend."

During an appearance on the "Left Unsupervised" podcast — apparently recorded before the divorce was finalized — Perla spoke about the "stress" that the legal battle has put on her, claiming that "other people and influences" have caused the divorce to turn "nasty and political."

"It's been four years since [Slash] left me and the boys, and we're still not divorced," Perla said (hear audio below). "For the first, like, year and a half, he did nothing — he just dragged his heels. He did this to me again. Slash has filed for divorce a few times, so this time I didn't know what… if it was any different than the last time.

"It's really sad because it's a situation where I sat down with Slash originally and I told him everything that I wanted, what would make me happy, and how I wanted to move forward," she continued. "And that was four years ago. Four years later, here we are leaning towards all of that. And yet I've spent — I don't know — six, seven hundred thousand dollars in legal fees. The stress — I've put on so much weight. My neck, my back has been horrible, and it's all stress related."

According to Perla, she was closely involved in Slash's business affairs during their marriage and she expected that her role in the business would remain intact even after they split. "I thought that when we separated… For the first year of our separation, I still worked for him — I still worked for our companies — and I thought that I'd always be a part of that," she said. "Because when I looked out for Slash… There's a difference with someone like me and there's a difference with someone like your average business manager per se. Your average business manager is looking at you, like, 'Holy shit. I need to make as much money off of you right now, 'cause I don't know the day that you're gonna fire me. I don't know if I'm gonna get other clients. I don't know what's going on. So I'm gonna let you make shitty decisions as long as it loads my pockets.' With me, it wasn't like that. I wouldn't let him make shitty decisions. I was always looking at it as a long-term… For me, with him, and even if I was still representing him… Now, it wasn't about, 'Give me a two-million-dollar advance upfront'; it was, like, 'Hey, I'd rather have a bigger percentage along the years than the percentage upfront.' But yet everybody else around him wanted a percentage upfront. So our divorce has really become quite nasty and political, and it's due to these other people and influences. It's other people's interests — other people's interests are benefiting from our sadness and our children's sadness and the destruction of our family. And that's the worst part about a divorce. And now, I get it, I see it — he sadly doesn't."

Perla went on to praise her ex-husband's guitar-playing skills while pointing out that he hasn't always been there for his children in the way that they have expected him to be.

"If Slash ever hears this one day, the truth of the matter is, and I've told him always, 'You can't be the fucking best at everything,'" she said. "He is hands down the world's best motherfucking guitar player of all times. I give this to this man — hats off, salute. I see his dedication. Yeah, he has a natural talent, but this man works for it. There's a guitar in his hands 24-7, and I give him that. But you can't be the best that and be a great business person. And you can't be great at all these other things. And that's more or less what I've been telling my children — it's the same thing. They're, like, 'Why isn't our dad there more? Why isn't dad like so-and-so's dad?', and what have you. And the truth is that's not who he is — he's never gonna be that. He's the best at this other thing that gives us this lifestyle, and he loves you the way he loves you. And that's how he's capable of loving you; it's not that he doesn't love you…"

Perla confirmed that she was pushing for Slash to reunite with GUNS N' ROSES for years before he reconnected with singer Axl Rose in 2015 and the wheels were put into motion for the hugely successful "Not In This Lifetime" tour. But even though her split with Slash happened before the GN'R reunion materialized, she claims to harbor no resentment over the fact that she isn't personally reaping the rewards of the tour's accomplishments.

"I have to say I'm genuinely just happy for him," she said. "That's because what makes you or I could be a hug from our children, and I'm not saying that that isn't something for Slash, but what makes Slash [and] gives him what he needs is getting up on stage and playing in front of hundreds of thousands of people and being able to really touch people around the world. And this is what fuels him. So I'm happy for him — I'm happy for him. I don't need to be backstage next to him. I wasn't there when I was married to him; I was at home raising the kids or working for him or something. So, really, there's nothing of that that I miss. I'm just really happy that he got the chance to do that and that his kids are getting a chance to see him in that light. And I just hope it really lasts."

Although her marriage to Slash brought certain material benefits, Perla says that it's the absence of emotional intimacy with the guitarist that has caused her the most heartache.

"People have asked me what do I miss the most being married to Slash. I miss my best friend," she said. "We were more friends probably than anything, to tell you the truth. So I miss that, and it's just a shame that the reason why we can't have that isn't because of him… Well, at the end of the day, it is because of him — it is because he lost that respect and loyalty factor. But it's also all the other people in his head that they're all… Everybody's benefiting from this, and other people's insecurities is what's keeping us apart."

Perla added that she will "be here always open arms for" Slash because he made her a proud mother of two sons, 16-year-old London and 14-year-old Cash. But, she pointed out, "He's basically in the same situation when I met him. When I met him, he had left he biggest rock band, he had left GUNS, he was left for dead. Even the same people around him today are all there now. What makes it any different? Why weren't they there for him then?"

Perla reportedly threw a huge divorce party on Saturday night (October 13) at her Los Angeles home, where she invited guests to come dressed as their favorite divorcee.

London — whose band played at the party — went dressed as a shirtless Tommy Lee, complete with telltale belly tattoo.

Slash and Perla reportedly did not sign a prenuptial agreement when they married in 2001, meaning that Ferrar would be entitled to half of Slash's income from 2001 to 2014.

The "Not In This Lifetime" trek, which reunited Slash, Rose and Duff McKagan, launched in 2016, and recently made its way through Europe.