The collection comes directly from their personal possessions and ranges in date from the early 1980s when he was still a struggling musician on the Sunset Strip in Hollywood to the late 1990s when he was an established rock star living in the glitzy Hollywood Hills.

A few of the treasures ready for you to bid on will include Slash's personal and professional wardrobe (though there is not much of a difference between the two!), dozens of his "cool graphics" t-shirts, numerous leather belts, significant music awards, RIAA gold record awards, unique and gothic-like furniture from his home, artwork related to his career, a single top hat from his massive collection of them, inscribed books from his celebrity friends, and assorted GN'R collectibles that he obtained and saved over the years.

The auction will take place online and at New York's Hard Rock Cafe on May 17 and May 18.

Slash kept all his guitars and any musical compositions he owns, with future proceeds belonging to the rocker. He also got a 2011 Ford F-150 and the Beverly Hills house. Perla got the house in Los Angeles, a 2014 Range Rover, a 2015 Mercedes AMG and a 2015 Mercedes GL 450.

Perla got primary physical custody of sons London and Cash, and each child will get .09% of Slash's income for the next 20 years.

Back in 2016, Slash claimed that he and Perla were never properly married because Perla's one-month marriage to Carlos Marty in 1993 didn't actually end as divorce documents weren't properly filed. The mistake was uncovered when Slash and Perla applied for dual citizenship for their son Cash.

Perla claimed the couple then hired a real lawyer in 2009 and a judge finalized her divorce from Carlos, making it retroactive to 1994.

GUNS N' ROSES' "Not In This Lifetime" trek, which reunited Slash, Axl Rose and Duff McKagan, launched in 2016. 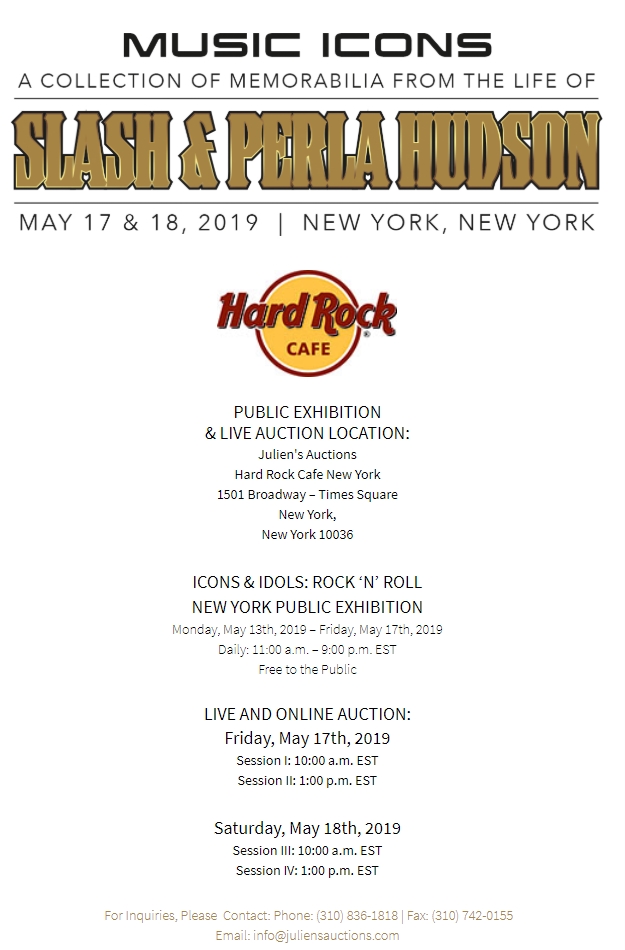