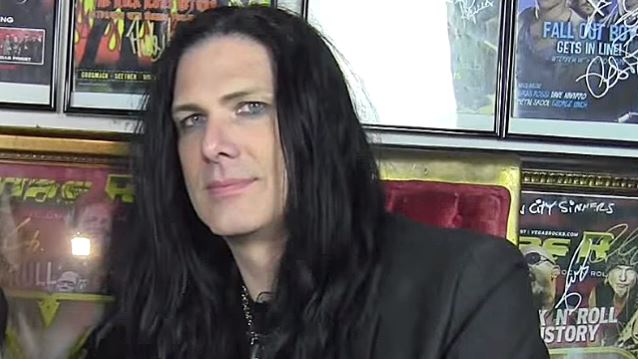 Todd Kerns, the bassist for Slash's backing band, MYLES KENNEDY & THE CONSPIRATORS, was recently interviewed by Sally Steele of VegasRocksTV.com. You can now watch the chat below.

Asked if he has gotten any "noble advice" from Slash in their years of playing together, Todd said: "He's not the kind of guy to actually verbalize anything like that, but I think just being around him and watching him… I mean, he's got a guitar in his hands all the time.

"I think if [I] learn[ed] anything from him, it's just that his work ethic is non-stop, and that's what I try to adhere to — make sure every day you're doing something to put into whatever it is you wanna try to achieve."

Pressed about whether there is anything that Slash has told him that was particularly memorable, Todd said: "Well, he has the craziest story — the man has [almost] died. He has all those stories of all these crazy things [that happened].

"The funny thing is I met him in 1991, and we were at the Rainbow [in West Hollywood], and he was, like, the mayor of the Rainbow; he was just kind of off in the corner. He came over and sat with me and my band at the time, and he has no recollection of this at all, 'cause he was… you know, he was partaking back then. He's a different man.

He continued: "I don't know that there's any one piece of advice, 'cause he's not a man of a lot of words, actually. He's a really intelligent guy."

Asked to elaborate on what he meant when he said that Slash "has died," Todd said: "He OD'ed back in the day; he's had a couple of different bad situations happen, and I think he's learned his lessons along the way that some doctor has to say to him, 'If you do this, you're going to die.' And I think he had to kind of… not do that. [Laughs] I think it made him a lot more serious. Anything like that must make you take stock of your life."

"World On Fire" was the second album to feature MYLES KENNEDY & THE CONSPIRATORS, and followed up 2012's "Apocalyptic Love".

On Slash self-titled solo effort he employed a different vocalist on each track, before settling on ALTER BRIDGE member Myles Kennedy for both touring and eventually recording.

SLASH FEATURING MYLES KENNEDY & THE CONSPIRATORS has been on hiatus for the last few months while Slash is focusing on the partial reunion tour of GUNS N' ROSES' classic lineup.