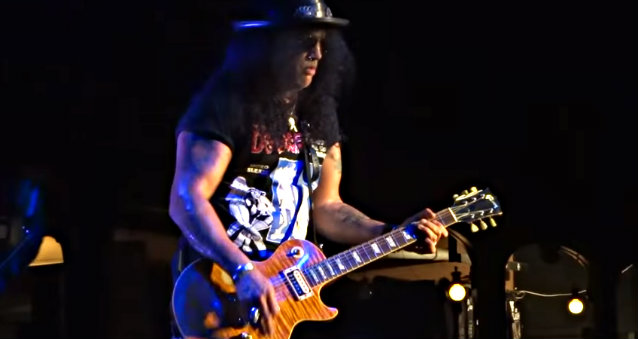 Slash and his band — MYLES KENNEDY AND THE CONSPIRATORS — are scheduled to stay on the road until the end of the year, after which they will take a short break before beginning work on the follow-up to their 2014 album "World On Fire".

"We're working on new material for the next record," Slash tells Billboard.com. "When this tour's over we'll start going in and doing some pre-production and probably go into the studio some time in mid-to-late spring and record."

Regarding how the new songs are shaping up, Slash says: "They sound very rhythmic and that's definitely something that, for me personally, I'm going for. We'll see what that turns into. It changes. It sort of evolves; you start out with one idea and that sort of morphs into another idea. At this point it sounds like it's going to be really awesome, so I'm excited about it."

Slash recently told Classic Rock magazine about his songwriting approach: "On the road is the platform that I find is the easiest for me to work on new material," he said. "It's easier here than it is for me to do when I'm at home. So I just get going. I take my phone and I record ideas on the phone and then we jam stuff at soundchecks; when we have soundchecks. So we compile a bunch of ideas, and then when the tour is over, we go home and, sort of, hash them out."