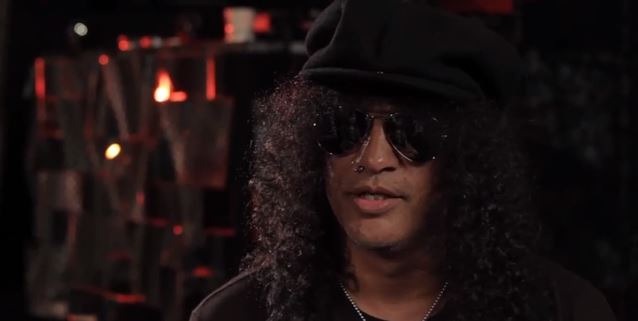 Tom Zutaut, former Geffen Records A&R executive who was responsible for signing GUNS N' ROSES to the label, was quoted as saying that at the height of the band's success he was worried that he would one day turn on the radio and find out that Slash had died of an overdose.

Asked how he finally managed to clean himself up, Slash told BBC Radio 6 Music (hear audio below): "Well, I wouldn't die. I mean, there's some truth to [what Zutaut supposedly said], where it was, like, I finally got to a point where it was, like, 'OK, I'm not going anywhere, so I'm gonna have to sort this out.' It wasn't that I had any kind of a death wish, per se, but I really took everything to the extreme and didn't care."

He continued: "I think the only time I got a little nervous was when I was in rehab, there was a point when VELVET went out and did a real quick tour around California. And so I left rehab and went out and did this tour, and it was the first time I'd been on stage sober — ever. [laughs] That was a trip and it was a little shaky, but you get past that pretty quickly. 'Cause you're in the moment; you can't just sit there and go, 'Oh my God, I can't do this.' You have to do it. So I got over that pretty quickly."

Slash, who has been sober since 2006, and has two young sons with his wife, Perla, whom he's been married to since 2001, told CNN about his last rehab stint: "It was good. It was very cathartic.

"I think the main reason — I mean, I'd established in my mind that I was finished with all that stuff. And the main reason, really — my thinking, at least, at the time, for going to rehab was just to get away from everybody and just have a month where I could get my head straight. And that's exactly what rehab did for me. And it gave me some insight into a lot of other things. You know, because I went in not fighting it — sort of surrendered to it, as the saying goes. And sort of just went in and open-mindedly looking at what it had to offer. And it was good. It was a healthy, whatever it was, 30 days, or something. And I did — I got a firm grasp on what I needed to be doing. And that I was really done sort of, you know, with that sort of merry-go-round of drugs and alcohol — that sort of roller coaster."

Slash's third album, "World On Fire", will be released on September 15. Slash and MYLES KENNEDY & THE CONSPIRATORS recorded 17 songs for the follow-up to 2012's "Apocalyptic Love". Among the tracks on the record are "30 Years To Life", "Shadow Life", "Automatic Overdrive", "Wicked Stone", "Bent To Fly", "Battleground" and the title track, which also serves as the set's first single.