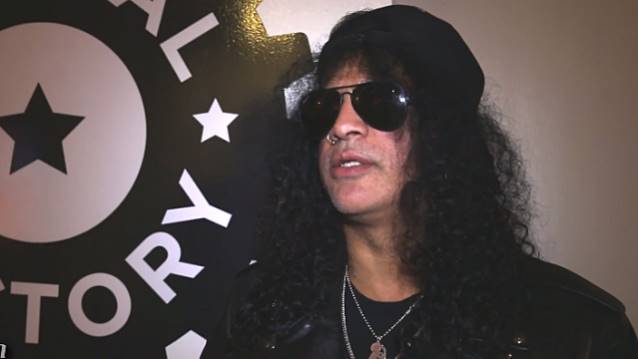 Legendary guitarist Slash (GUNS N' ROSES, VELVET REVOLVER) was interviewed by Artisan News (see video below) at the South By Southwest festival in Austin, Texas where he threw the first-ever musician-focused Hackathon, titled Slashathon, at Capital Factory. For seven hours straight, teams of technology developers worked to create new and interesting music-oriented applications for promotion on-the-spot. After the seven-hour window, developers gave full demo presentations of the hacks to Slash, who was joined by fellow judges Bram Cohen (Bitorrent) and Robert Scoble (first Microsoft employee, Rackspace). Three winners were selected. The Grand Prize includes a Gibson guitar autographed by Slash, $1,000 dollars and the opportunity to have Slash use the winning hack with the release of his new album with MYLES KENNEDY AND THE CONSPIRATORS, due out in early fall 2014.

Slash wrapped-up his run in Austin during South By Southwest with a performance this past Thursday night (March 13) at Butler Park. Slash performed "Foxy Lady", "Red House", "Purple Haze", "All Along The Watchtower" and "The Star-Spangled Banner" at the "Jimi Hendrix Celebration" with Wayne Kramer (MC5), Rusty Anderson (Paul McCartney), Dave and Phil Alvin and Robby Krieger (THE DOORS) on the Outdoor Stage at Butler Park in Austin.