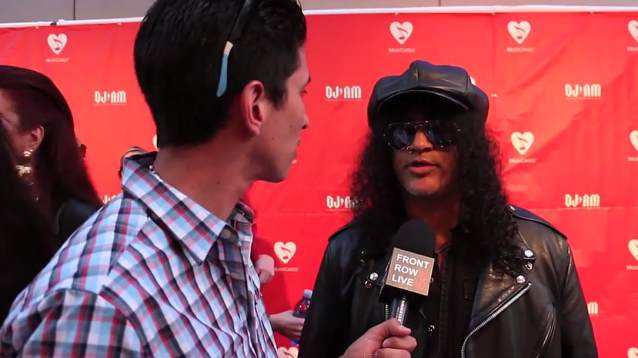 Robert Herrera of FrontRowLiveEnt.com spoke to Slash on the red carpet of this past Monday's (May 12) 10th annual MusiCares MAP Fund benefit concert, which honored BLACK SABBATH singer Ozzy Osbourne. Speaking about his forthcoming third solo album, which he and his band MYLES KENNEDY & THE CONSPIRATORS recently finished recording, Slash said (see video below): "It's just a great record. It's done. We had a blast in the studio. All the guys are great — really great personalities to deal with, really talented individuals as musicians. So it's just a breeze in the studio. But this particular record being our second one together, it really showed that the band has evolved a lot and that we have a really great chemistry. When it comes out, you'll know what I'm talking about."

Slash recently told U.K.'s Kerrang! magazine about the forthcoming CD: "All I can tell you is that it's a really fucking great record. I'm very proud of it, but I don't want to get into, 'Oh, dude, it's epic,' or 'It's the heaviest thing ever.' It's very rock and roll, and, as always, it's very diverse in feel, and I'm just super, super proud of everything that we collectively put into making the thing. It's just going to be a bitchin' record."

The new album is tentatively due out in September and will follow up 2012's "Apocalyptic Love". Slash released his first self-titled solo effort in 2010.

The guitarist was inducted into the Rock And Roll Hall Of Fame in 2012 as a founding member of GUNS N' ROSES. His other bands have included VELVET REVOLVER and SLASH'S SNAKEPIT.