GUNS N' ROSES guitarist Slash recently discussed "Living The Dream", his forthcoming album with vocalist Myles Kennedy (ALTER BRIDGE) and THE CONSPIRATORS, with the New York radio station Q104.3. The full conversation can be viewed below. A few excerpts follow (as transcribed by BLABBERMOUTH.NET).

On the title "Living The Dream":

Slash: "It was originally just a sort of tongue-in-cheek statement about local politics. When I say local, I mean domestic [American] politics, [but] also global as well. There's nothing seriously political on the record, but I just had to make one quick statement."

On the timetable in which the album was recorded and written:

Slash: "We sort of dipped our toe into pre-production towards the end of the 'World On Fire' tour. When we'd have a week off or two weeks off, I would go in the studio with the guys — not a recording studio, just a rehearsal room — set up, and just start working through some of the ideas that were there. Then the GUNS thing started, and everything stalled. Come January of 2018, we got back together and revisited some of those ideas and really flushed [sic] them out and made arrangements for them, and then wrote some new stuff as well."

On what he plans to perform live during his upcoming tour with Kennedy and THE CONSPIRATORS:

Slash: "When we first started out in 2010, I just had the solo album ['Slash'] with all the different singers on it, so at that point, we did songs off of that record and a lot of GUNS N' ROSES stuff which I hadn't played in years, and then some VELVET REVOLVER and some [SLASH'S] SNAKEPIT [material]. We did that, and then we recorded 'Apocalyptic Love', so we had a little bit more original material, but we kept doing the GUNS stuff and VELVET REVOLVER and so on. 'World On Fire', at that point, we had a pretty good catalog of our own stuff, but I was still digging playing 'Welcome To The Jungle' and whatnot. Then I hook up with GUNS N' ROSES, so now, I've played all those songs for the last two years, so I'm sort of like, 'Okay, we don't have to do any more GUNS N' ROSES songs.' We have enough to do."

On Kennedy and THE CONSPIRATORS:

Slash: "All the guys are awesome. It's a great little rock n' roll unit."

On whether it was difficult to rebuild rapport after taking a two-year break:

Slash: "The chemistry's there automatically. It's just a natural sort of... it's a thing. It's a very sort of unseen, organic thing that happens. When you start playing together, you know how to play off of each other. You sort of predict what the other guy's going to do. I don't know how it works, but it just does."

Slash: "The m.o. has been, I'll come up with music, and I'll turn Myles on to it. If he's into it — if it sparks his interest — then we'll work it up into something. 'Mind Your Manners' was the first thing that, in late January, one of the first rehearsals that we had since we got back together since 2015... I just made up a riff on the spot so that we'd have something to play, so we didn't have to stand around and go, 'Well, what should we do first?' That happens, and you can stand around for a long time before you decide. 'Mind Your Manners' was that, and we just made it up on the spot. It was fun and it was uptempo and it just got the gears going. Then Myles heard it, and he automatically wrote something, so all of a sudden, we had a new song."

Slash: "That's it for the 'Not In This Lifetime' tour. Then I'm going go back out with THE CONSPIRATORS, and we're going to do a whole world run over the next year. We'll see what happens with GUNS, the next cycle."

On whether the band has started working on any new material:

Slash: "We haven't gone there. We've been so busy on the road this entire time. We'll just see what happens as it happens."

On why "Shadow Of Your Love" wasn't included on "Appetite For Destruction":

Slash: "The [first] GUNS N' ROSES lineup — the 'Appetite For Destruction' lineup — that was one of the first songs that we played, and we played that and a handful of other songs live at our first gigs. As this lineup started writing new material, it sort of slowly but surely got phased out. We didn't play it again for a while, and then when we were looking for producers and met Mike Clink, we wanted to go and record a song with him before we signed on to do a whole album. 'Shadow Of Your Love' was the song that we picked. That version you're hearing now is that demo from back then. I think we just grew out of it, but now, it's a lot of fun. This last European tour we just did, we put it in the set, and it's a blast. There's something really cool about having a song like that that you haven't played in fuckin' thirty years, and then all of a sudden, it's out on the radio, and you get to go back and start playing it. It's got a cool, cool attitude. It's pretty kinetic."

On Axl Rose performing with AC/DC:

Slash: "I went to one of those shows, and it was phenomenal. One of the first things he said was [that] he had a way of doing it where it wasn't taxing on his voice. I was in awe of the whole thing. He definitely had a way of doing it that it wasn't killing him every night. It's hard to come back from that if you're not doing it right, and as soon as he came back from the AC/DC tour, he went straight into GUNS N' ROSES and it was seamless."

On whether there was a moment after returning to GN'R when he realized the "magic" was back:

Slash: "It started with rehearsal. It started out with just Duff [McKagan] and I and Frank [Ferrer] and Richard [Fortus] and Dizzy [Reed], and just sort of getting back into the groove after 20 years. We got that going, and Duff and I have a very definite chemistry that happens right off the bat. But when Axl showed up to rehearsal and we started doing the set, it was one of those very palpable kind of feelings — the three of us together, and what happens when that happens. We didn't talk about it or anything, but it was something I was very aware of, and I was like, 'Wow.' It was cool."

On his side career as a feature film producer:

Slash: "I'm working on four right now. They're in different states of development. I've got two that I just signed deals on, so I'm really happy about that, and then the other two will hopefully not be far behind."

GUNS N' ROSES' "Not In This Lifetime" tour is scheduled to end with a November 29 performance in Johannesburg, South Africa.

Slash will release "Living The Dream", his fourth solo album (and third with Myles Kennedy and THE CONSPIRATORS), on September 21. 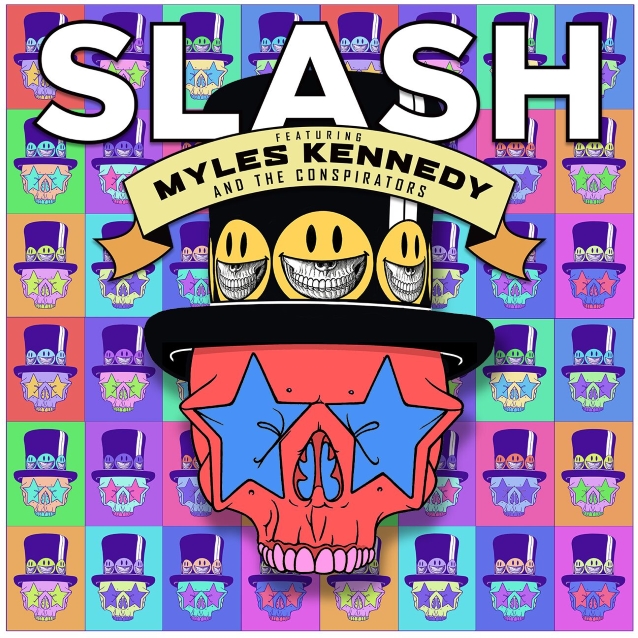