Perla Hudson, wife of former GUNS N' ROSES guitarist Slash (real name: Saul Hudson), has responded to a newly published interview with GN'R singer Axl Rose in which he describes the top-hatted axeman as "a cancer."

Addressing the possibility of a reunion of GUNS N' ROSES' classic lineup, Rose said in a friendly chat with his pal, songwriter Del James, that was posted on AOL Music's Spinner.com web site, that it was "highly doubtful for us to have more than one of the alumni up with us at any given time."

"I suppose (former bass player) Duff (McKagan) could play guitar on something somewhere but there's zero possibility of me having anything to do with Slash," Rose said.

"In a nutshell, personally I consider him a cancer and better removed, avoided — and the less anyone heard of him or his supporters the better."

As a post script to a message posted earlier today (Saturday, February 28) on her official MySpace blog, Perla wrote, "Have any of you seen that angry shit that Axl had to say about Slash? I just wish he was man enough to talk shit to Slash's face! ...LOSER!"

Photo below is from Perla Hudson's MySpace page 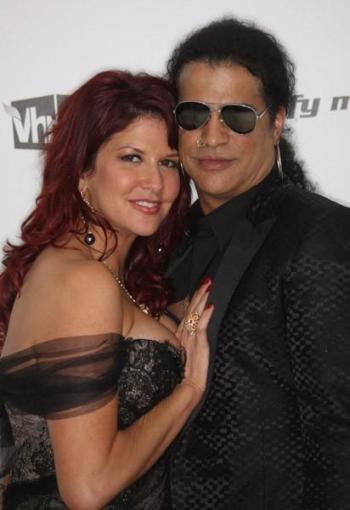