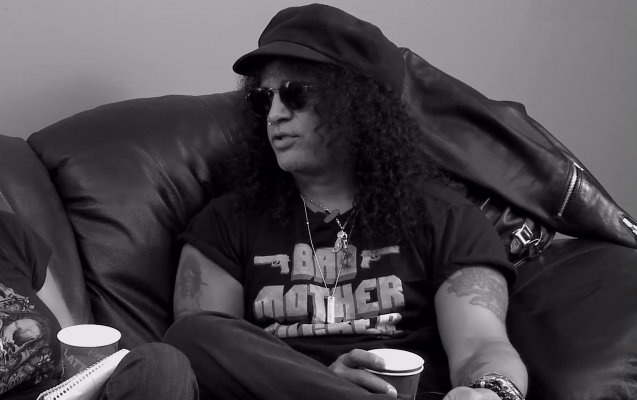 Mistress Carrie of the Worcester/Boston, Massachusetts radio station WAAF recently conducted an interview with legendary guitarist Slash. You can now watch the chat in four parts below. A couple of excerpts follow (transcribed by BLABBERMOUTH.NET).

On whom he would like to play him if a movie is ever made about his life:

Slash: "I hope they never do that. The thing about rock movies is that they never give the reality of rock and roll, they never do it justice, it always turns out to be a parody. Even the best rock movies are laughable. [Unless they're intended to be a parody] and then they're funny. 'Spinal Tap' was great, but I think 'Spinal Tap' got under everybody's skin and we haven't been able to get rid of it since. But very few rock movies are really credible. So when you're doing a story like that, artistic license and so on, it makes me very nervous."

On the never-ending barrage of questions he gets about a possible reunion of the classic GUNS N' ROSES lineup:

Slash: "It's a subject I just avoid. 'Cause I've tried all different approaches on this particular subject. The thing is it's been dead in the water since 1996. I'm not gonna joke about it. Anything I ever said that led anybody to believe that there might be any kind of a reunion was just me being nice. No one's ever considered it. It's not really in the cards. And the thing with the Rock And Roll Hall Of Fame was that was the closest we got to it, or could have gotten to it, and it didn't happen. And I said, 'You know what?! Let's just close the books. That was a very public event, and hopefully everybody gets it.'"