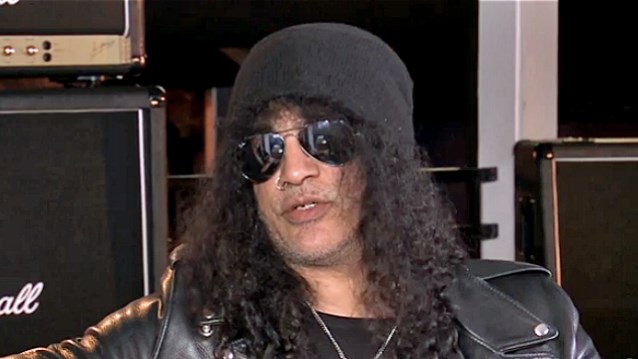 During a brand new interview with AL.com, legendary guitarist Slash spoke about the progress of the songwriting sessions for the follow-up to his latest solo album, 2014's "World On Fire".

"We're working on new material now, for another record, and so I think that what it is that I'm into is just trying to do what's the most inspiring thing, and picking up some new stuff along the way," he said. "There's always that element of new discovery that ends up on the next record. But the one thing they can always expect, it's going to be really sort of from the heart, hard-rock material, whatever it is that I end up putting out. I'm always true to the school."

Slash told TeamRock during this year's Soundwave festival in Australia about his songwriting process: "On the road is the platform that I find is the easiest for me to work on new material. It's easier here than it is for me to do when I'm at home. So I just get going. I take my phone and I record ideas on the phone and then we jam stuff at soundchecks; when we have soundchecks. So we compile a bunch of ideas, and then when the tour is over, we go home and, sort of, hash them out."