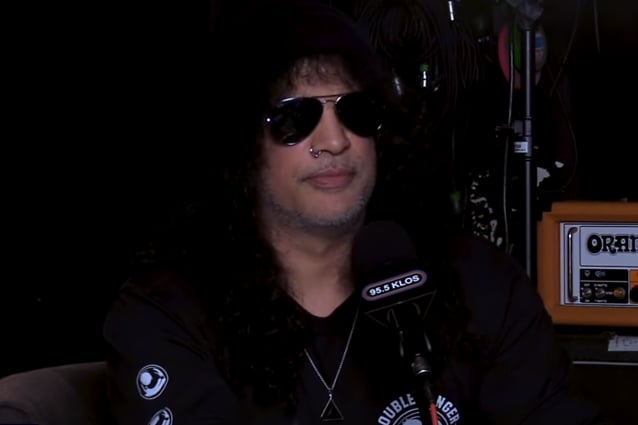 During a December 13 appearance on SEX PISTOLS guitarist Steve Jones's radio show, "Jonesy's Jukebox", on the 95.5 KLOS station in Los Angeles, GUNS N' ROSES guitarist Slash spoke about the band's 1993 covers album, "The Spaghetti Incident?" The effort was recorded when the Axl Rose-fronted group was in a state of turmoil and turned out to be the only album by GUNS N' ROSES that the band didn't tour to support.

Explaining GUNS N' ROSES' choice of source material, Slash said: "Duff [McKagan, bass] picked a couple [of tracks]. [THE SKYLINERS' 1958 doo-wop classic] 'Since I Don't Have You', I remember [Axl] had brought it up, and I'd always loved that song, so I was, like, 'Yeah, that'd be a great song to do.' I think 'Hair Of The Dog' [NAZARETH] was one of the ones that he and I both wanted to do. But, yeah, everybody sort of threw ideas in the hat… It was a hell of a lot of fun. It was very spontaneous and it was recorded in different studios around — well, some stuff was in the States; I think we recorded some stuff in, I wanna say Canada — don't quote me on that. But I know that there were different studios, different locations while we were on the road. So we would just pop in. And ['Since I Don't Have You'], I remember we just rented out some studio in the middle of the country somewhere — just found it, booked it, went in there and whipped it out. So it was a lot of fun to make."

Slash went on to say that he is a fan of covers albums in general. "Just being able to do an interpretation of a song that you really like [is really cool]," he explained. "Some cover records are better than others. But the ones where the artist really relates to the original material and it becomes part of their personality when they re-record it, I think that's really cool. I thought 'Garage Days' [referring to 1987's 'The $5.98 E.P.: Garage Days Re-Revisited'] from METALLICA was one of the best cover records of all time. It was great."

"The Spaghetti Incident?" controversially included a cover of Charles Manson's musical critique of a girl's shortcomings, "Look At Your Game, Girl", which appeared as an unlisted bonus track. After a public outcry over the fact that Manson could profit off the royalties from the song, the matter was settled so that royalties from the cover would go to relatives of Manson's victims.