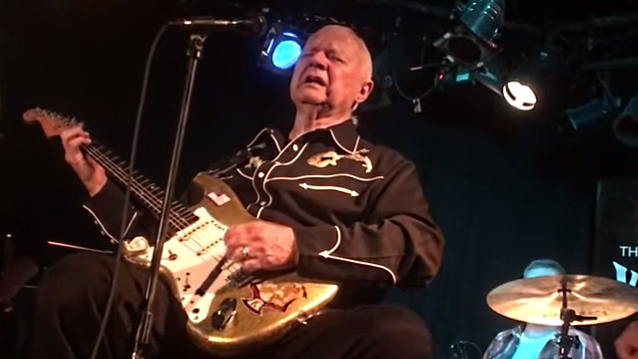 The guitarist's health had declined over the past 20 years due to a number of illnesses, including diabetes, kidney disease and rectal cancer. Up until the end of his life, Dale was forced to stay on the road to fund his treatment.

"I can't stop touring because I will die. Physically and literally, I will die," he told the Pittsburgh City Paper in 2015. "Sure, I'd love to stay home and build ships in a bottle and spend time with my wife in Hawaii, but I have to perform to save my life."

Born Richard Anthony Monsour in May 1937, Dale created the sound of the surf guitar by working with Middle Eastern music scales applied to a driving beat.

His fifth single, 1961's "Let's Go Trippin'", is considered the first surf rock instrumental and has been credited with launching the early 1960s craze.

The song that cemented Dale's place in rock history was "Misirlou", which he recorded and first released in 1962. The track rode another wave of fame in the mid-1990s when it featured prominently in the soundtrack of Quentin Tarantino's cult hit "Pulp Fiction".

"Having 'Misirlou' as your opening credit, it's just so intense," Tarantino said. "It just throws down a gauntlet that the movie now has to live up to."

RIP Dick Dale - Father of the Surf Guitar. We all owe you. Rock on. Bri https://t.co/lxeDGCCOnw

I’m sorry to hear about Dick Dale passing. Dick’s guitar playing was a big influence on all of us, and we covered “Misirlou” on our Surfin’ USA album in ‘63. Love & Mercy to Dick’s family. pic.twitter.com/QPd2wzo7zB

Dick Dale, who will forever remain a guitar God. May his spirit rest in peace. We will meet again brother. pic.twitter.com/tf77lcQGWy

Rest In Peace Dick Dale... True original, So Cal Surf, American icon and a gentlemen of the highest order. pic.twitter.com/G3Uw5Xk055

Rip Dick Dale the King Of the Surf guitar https://t.co/kREuwdOPcA.