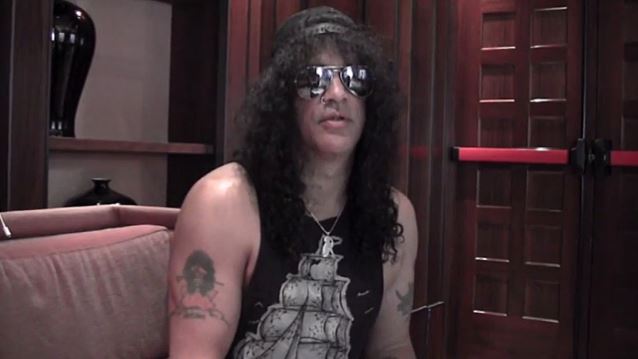 Journalist and musician Barbara Caserta of Italy's Linearock recently conducted an interview with legendary guitarist Slash. You can now watch the chat below.

Speaking about the tremendous commercial success of GUNS N' ROSES' classic first album, "Appetite For Destruction", which is said to be the biggest-selling debut LP of the Eighties and the biggest hard-rock game-changer since "Led Zeppelin IV", Slash said: "I'm so proud of the fact that I was involved in a record that had that kind of impact. But if you were to tell me back then that that's what it was gonna be, I would never have believed you. It was just a record made by these five characters, and looking back on it, there was something in all that that spoke to people in a certain way. It was a very street-wise band but with a very naïve worldview. It was a social commentary, but it wasn't about the world at large, it was internal angst that teenagers, I guess, really related to and it was delivered with the kind of impact that really had a big effect on people. And it's the combination of emotions and energy and all this stuff that couldn't even really be replicated. It was just something that happened in the moment that's… I mean, I remember when the record was finished, I thought we'd be a really cool cult band. [Laughs]"

In a 2012 interview with Australia's Triple M radio, Slash stated about "Appetite For Destruction": "'Appetite' is not what you'd call a favorite record [of mine]. I never even thought of it that way. It's a good record, but, to me, it's still that record that we made at the time when all that shit was happening. I mean, when we recorded [those songs], it was just what we were doing [at the time], and so I still look at it that way. I don't see it as being the big record that other people see it as; I'm too close to it."

He continued, "When we got together, as far as I was concerned, we were definitely the only five guys that could have made up that band. There were a lot of different configurations — Steven [Adler, drums] and I; Steven, Duff [McKagan, bass] and I; Steven, Axl [Rose, vocals] and I; Izzy [Stradlin, guitar] and Axl; Izzy, Axl and Duff — and it finally finally settled into what became that band. And I don't think any of the other configurations could have possibly worked to make up what GUNS N' ROSES really was. And the record I just sort of a basic snapshot of life going on from 1984 to 1987, and it's a very honest record. I would never have thought in a million years that it was gonna be as successful as it became. Obviously, I thought we were a great band, I thought the songs were great, and I always stood behind that, but I thought we'd be more of a hard rock cult band.

"At this point that it became so iconic, I think one of the reasons is the fact that it was talking about stuff that nobody really talked about at the time, it was delivered with an attitude that was so sincere that a lot of people really related to it because we said things that people would have felt uncomfortable about saying but felt those same things. And we were living really on the edge and singing about it and people were like, 'Wow, that's pretty brutal.'

"The songs happened so quickly, they almost wrote themselves — honestly. With Axl, I know that he was always very, very conscientious of the lyrics and might have spent some more time with the lyrics, but the actual arrangements and the music itself would come together within an hour. We might have fine-tuned some stuff later on, but we'd be playing a new song in a club after only having worked on it for a couple of hours."

Produced by Mike Clink (MEGADETH, UFO), "Appetite For Destruction" was certified on September 23, 2008 by the RIAA (Recording Industry Association of America) for U.S. sales in excess of 18 million copies. The LP has reportedly accumulated worldwide sales in excess of 30 million.

The album's original cover, based on the Robert Williams painting "Appetite For Destruction", depicted a robot rapist about to be punished by a metal avenger. After several music retailers refused to stock the album, they compromised and put the controversial cover art inside, replacing it with a cover depicting a cross and skulls of the five band members (designed by Billy White Jr., originally as a tattoo), each skull representing one member of the band: Izzy Stradlin, top skull; Steven Adler, left skull; Axl Rose, center skull; Duff McKagan, right skull; and Slash, bottom skull. The photographs used for the back of the album and liner notes were taken by Robert John.