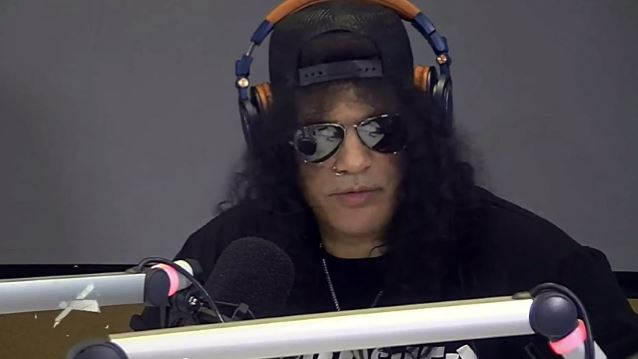 Legendary guitarist Slash was interviewed by Argentina's Vorterix radio station prior to his March 6 concert in Buenos Aires. You can now watch video footage of the chat below.

Asked how he feels about still recording full-length albums at a time when so many artists are beginning to focus on singles and EPs, Slash said: "The only stuff I do is basically the stuff that I like to do. So, yeah, we put out records 'cause we like doing a body of work. I never thought even thought about it. I never thought about what everybody else does, especially nowadays."

Regarding the fact that most fans still expect him to perform a lot of his classic GUNS N' ROSES material when he plays live, Slash said: "I like doing it. I have a fun time touring. I don't do anything because people expect me, necessarily, to do it. First and foremost, I do what I feel like doing, and then you see how that sort of works out. I think, over the years, everybody sort of expects me to be just to be myself. They're not expecting me to try and do anything for everybody else's sake. But, that said, it's a great feeling when you do something that you wanna do and other people respond."

Slash recently told Classic Rock magazine that he has "already started working" on material for the follow-up to his latest solo album, 2014's "World On Fire".