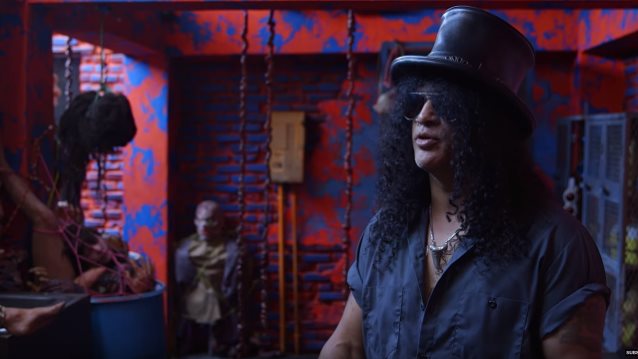 BangerTV is kicking off 2016 with a brand new show: "Sam Dunn's Metal Journeys". The first episode features an interview with guitar legend Slash in Hollywood on the site of Universal Studios, talking about his love for horror, and composing music for the tourist attraction's famous Halloween haunt.

"Sam Dunn's Metal Journeys" follows documentary filmmaker Sam Dunn as he travels the world exploring the global metal community. It continues the mission Banger Films began with its 2008 feature documentary "Global Metal": to examine what metal means in different cultures by meeting with the musicians and other passionate metalheads who've devoted their lives to this music. Upcoming episodes will take you to a metal themed restaurant in Gothenburg, Sweden; the working man's club in Sheffield, U.K. where DEF LEPPARD got its start; David Coverdale's Lake Tahoe home in Nevada; North America's biggest metal festival in Montreal, Canada; and a special three-part series documenting the growing local scene in Johannesburg, South Africa.