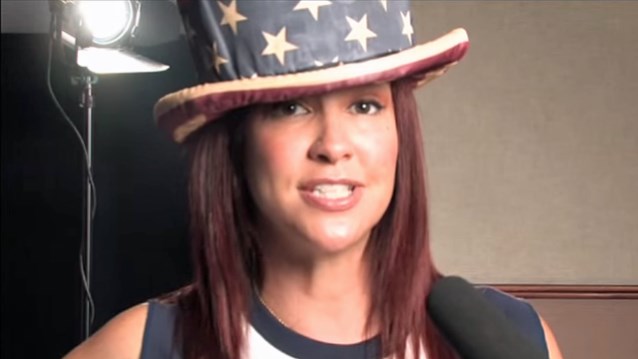 Slash's estranged wife Perla Ferrar has hit back at the guitarist, saying that his attempt to avoid sharing half of his earnings from the time they were supposedly married with her is "very hurtful to me and disrespectful to our children."

Slash is claiming that he and Perla were never actually married, which would make it possible for the GUNS N' ROSES guitarist to keep most of his money to himself. According to TMZ, Slash insists that they were never properly married because Perla's one-month marriage to Carlos Marty in 1993 didn't actually end as divorce documents weren't properly filed. The mistake was uncovered when Slash and Perla applied for dual citizenship for their son Cash.

Ferrar, however, claims that a judge finalized her divorce from Marty in 2009, making it retroactive to 1994. Ferrar may have a legal advantage because there is a law that addresses the issue of "putative spouses," meaning that if people have a reasonable belief they are married, a judge can decide to legally divide their assets.

While she was out in Beverly Hills on Monday (October 31), Perla was asked by a TMZ cameraman why Slash is trying to avoid splitting his assets with her. She responded (see video below): "I have no idea why. It's very hurtful to me and disrespectful to our children. I gave him 18 years of my life, so it's a bit unexpected and humiliating and disrespectful to our family."

Perla also revealed that she had an unpleasant experience seeing Slash perform with GUNS N' ROSES at this year's Coachella festival in April. She said: "It really wasn't what we expected it to be. It should have been a more celebratory thing for our family because their father was back with his band and playing at Coachella. But that's when I realized when there was a lot of tension and bad blood from Slash's camp towards me." She added that while she "certainly didn't" spend time with Slash at the event, "the kids were able to see him" on the day that their father performed.

Slash filed for divorce from Ferrar for the second time in four years in December 2014. They have two sons.

She would not, however, be entitled to any of Slash's share of the reported $117 million and counting that the current GUNS N' ROSES reunion tour has raked in.

The "Not In This Lifetime" trek, which reunited Slash, Axl Rose and Duff McKagan, launched earlier this year, hit North American stadiums this past summer, and is now making its way through South America.