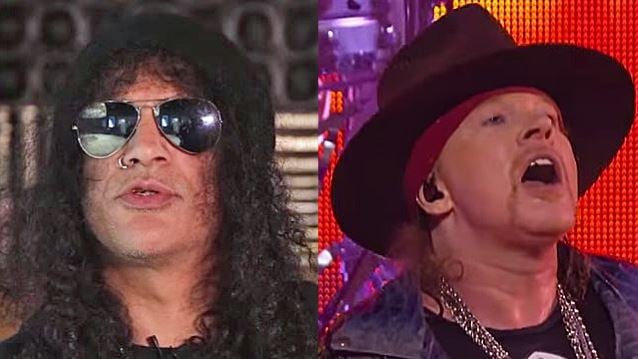 Former GUNS N' ROSES guitarist Slash has confirmed that he has rekindled his friendship with the band's lead singer Axl Rose — six years after the frontman called him "a cancer."

Speaking to Aftonbladet TV in Sweden, where Slash was making a special appearance on Friday (August 21) for a launch event for the Marshall London phone, the guitarist said of his restored relationship with Axl (see video below): "It was probably way overdue, you know. But it's…. you know, it's very cool at this point. You know, let some of that, sort of, negative… dispel some of that negative stuff that was going on for so long."

Asked if his warmer relationship with Axl will lead to a reunion of GUNS N' ROSES' classic lineup, Slash said: "Oh, I couldn't answer that one, though…" Pressed on why that is, Slash replied: "All right, let's get off the subject, 'cause, you know, that's an old one."

Slash was asked about the possibility of a reunion of the classic GUNS N' ROSES lineup on the May 7 edition of "CBS This Morning" and gave a somewhat surprising answer. He replied: "I've got to be careful what I say there. I mean, if everybody wanted to do it and do it for the right reasons, I think the fans would love it. I think it might be fun at some point to try and do that."

Asked what the "right reasons" might be, Slash said: "I mean, that's a hard one. That just starts to get into a whole complex thing... It's really between the guys in the band." But pressed on whether he thought it was likely, Slash said, "Never say never."

Slash told The Pulse Of Radio a while back that the band's induction into the Rock And Roll Hall Of Fame three years ago — at which he performed along with GUNS bassist Duff McKagan, drummers Steven Adler and Matt Sorum, and others — gave him a sense of closure about the band. He said: "I never, in however many years it's been, ever planned or thought that there was gonna be any reunion. But now we've played the one gig as close to a reunion as it will ever get and done with it, and it did have… There was a definite feeling of closure and, you know, something that, when I got on the plane the next morning, it was like I never have to deal with that again."

Addressing the long-running feud between him and Axl Rose that many saw as the main stumbling block to a reunion, Slash said, "We haven't really talked in a long time, but a lot of the tension that you were talking about has dissipated. We don't have all those issues anymore. It's not a lot of controversy. It's something that is more perpetuated by the media, more than anything."

Axl famously called Slash a "cancer" in a 2009 interview, saying that the chances of him and Slash getting onstage together at any point in the future were next to impossible.

Axl and guitarist Izzy Stradlin did not attend the Hall Of Fame induction.

Guitarist Darren Jay "DJ" Ashba quit GUNS N' ROSES last month, while another GN'R six-stringer, Ron "Bumblefoot" Thal, also reportedly left the band in 2014. The group has not yet announced a replacement for either musician.