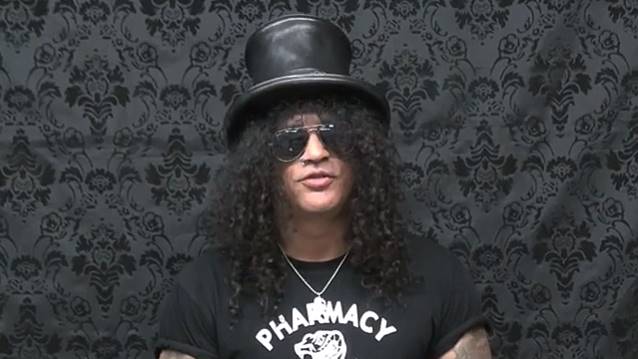 In the first episode of #AskSlash, guitar icon Slash (GUNS N' ROSES, VELVET REVOLVER) answers questions submitted about learning to play the guitar. Check it out below.

Slash and his backing band, MYLES KENNEDY & THE CONSPIRATORS, have finished mxing the third album to be released under the Slash solo banner. A total of 17 songs, including one instrumental, were laid down for the follow-up to 2012's "Apocalyptic Love".

Slash recently spoke with the U.K.'s Kerrang! magazine about his third solo album. He remarked, "All I can tell you is that it's a really fucking great record. I'm very proud of it, but I don't want to get into, 'Oh, dude, it's epic,' or 'It's the heaviest thing ever.' It's very rock and roll, and, as always, it's very diverse in feel, and I'm just super, super proud of everything that we collectively put into making the thing. It's just going to be a bitchin' record."

The new album is tentatively due out in September. Slash released his first self-titled solo effort in 2010.