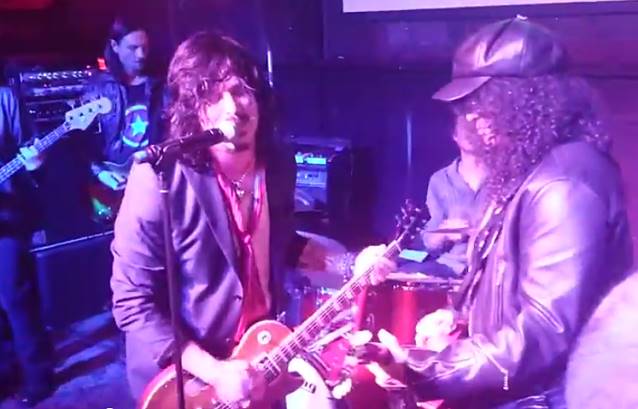 Slash joined his former GUNS N' ROSES bandmate Gilby Clarke on stage this past Tuesday, November 12 during the BandFuse: Rock Legends video game launch event at House Of Blues in West Hollywood, California to perform THE BEATLES classic "Come Together". Fan-filmed video footage of their appearance can be seen below.

Slash and Clarke, along with fellow former GUNS N' ROSES members Duff McKagan, Steven Adler and Matt Sorum, performed three "Appetite For Destruction" songs with Myles Kennedy at the band's Rock And Roll Hall Of Fame induction ceremony in April 2012 in Cleveland, Ohio. Kennedy, who handles lead vocals in Slash's solo band and ALTER BRIDGE, sang "Mr. Brownstone", "Sweet Child O' Mine" and "Paradise City", with "Use Your Illusion"-era member Sorum sitting behind the drum kit on "Brownstone" and the man he replaced in GN'R, Adler, pounding the skins for the other two songs.