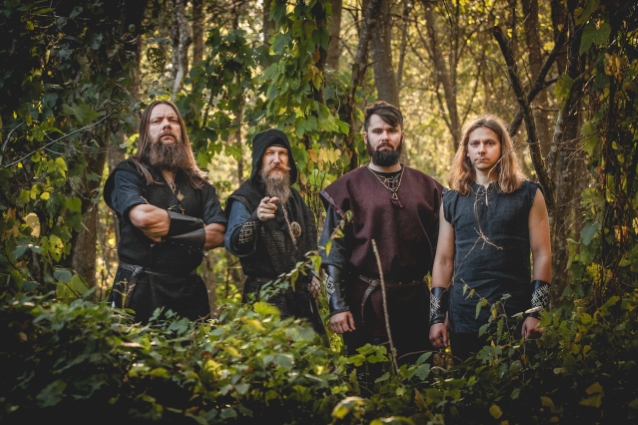 Latvian heavy metal band SKYFORGER has released a brand new video for the song "Nothing Is Forgotten", from the band's 2015 album "Old Prussia", to celebrate the 100th anniversary of Latvia's declaration of independence.

Kristīne Neikena, who directed the video, says that main idea is there to remind that when it comes to Latvian history, "nothing is forgotten," including the hardships and struggles of the Latvian people throughout the years.

The video tells the story through the eyes of a young woman played by Maija Arvena, a rising Latvian film star. Her character's journey is an emotional and symbolic account of the pivotal moments in the history of a Latvian nation, its birth, hopes, rise, fall and, ultimately, rebirth and strength while national landmarks, nature and events feature in the background.

SKYFORGER vocalist Peter Kvetkovskis adds: "As we celebrate the centenary of Latvia's independence today on 18th November, we want to dedicate this video as an epitaph of sorts to all those whose lives were broken by all the wars and conflicts that have befallen our land, and to those who have made the ultimate sacrifice, so that future generations could live happily as a free and independent nation. The thing is, history tends to remember only the key figures, including the villains and monsters, while the lives of hundreds of thousands of 'ordinary' folks slowly disappear and vanish from the nation's memory… Well, our song is about exactly these people and in their memory!"

SKYFORGER has been an enduring act of authenticity and folkish tradition for the past two decades. Their unique combination of ancient and modern music blends the traditional Baltic folk sounds with extreme sonorities such as the Norwegian black metal or the heavy metal from the '80s.