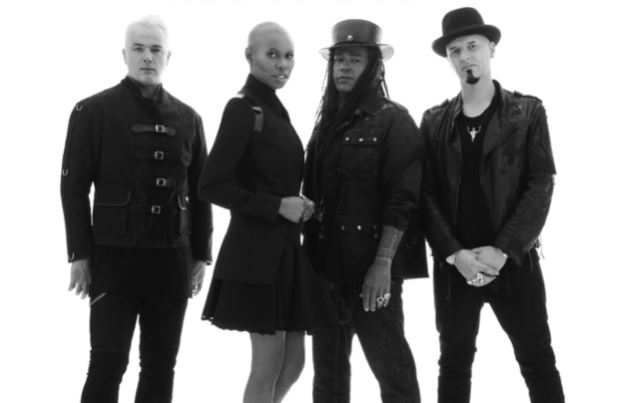 British rockers SKUNK ANANSIE will release their sixth studio album, "Anarchytecture", on January 15, 2016. The follow-up to 2012's "Black Traffic" was produced by Tom Dalgety (ROYAL BLOOD, KILLING JOKE, BAND OF SKULLS) at RAK Studios in London, with mixing duties divided between Dalgety and Jeremy Wheatley, and mastering set to be handled by the legendary Ted Jensen at Sterling Sound in New York. The new CD is described in a press release as "a collection of hard-hitting alternative rock anthems, brimming with punchy riffs and the sort of fire that can only burn from the heart and soul of vocal powerhouse Skin."

The release of "Anarchytecture" will be supported by a full European headline tour, including two dates in the U.K.

Meanwhile, Skin is currently appearing as a judge on the Italian version of "The X Factor", having studied Italian following the invitation to get involved; she also features on the cover of this month's issue of the Italian Vanity Fair.

SKUNK ANANSIE went on to become one of the biggest rock bands in Europe throughout the '90s, selling over five million records and doing seven sell-out world tours up to 2000. In 1999, the band headlined the Glastonbury festival, and they have also performed with Pavarotti for the Dalai Lama, and Nelson Mandela for his 80th-birthday "Gift To The Nation" shows.