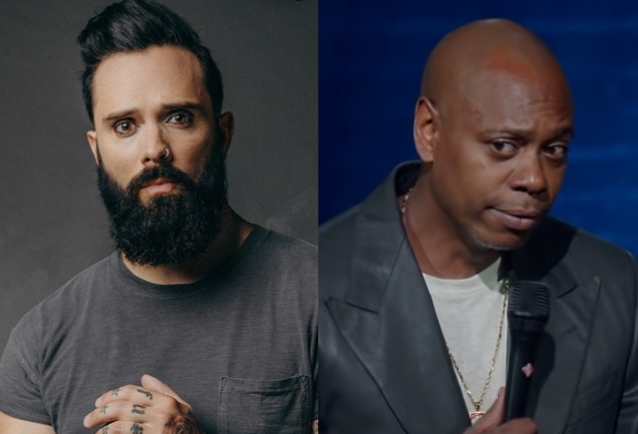 John Cooper, the frontman and bassist for the Grammy-nominated Christian rock band SKILLET, has offered a surprisingly strong defense of Dave Chappelle amid the uproar over the comedian's Netflix special.

Critics have decried "The Closer" as "dangerously transphobic" over several of Chappelle's jokes, specifically around the "thin skin" of trans people and the effects of so-called "cancel culture." Transgender writer-producer Jaclyn Moore said she would no longer work for Netflix while the National Black Justice Coalition, a civil rights group dedicated to the empowerment of the black LGBTQ community, asked the streaming service to remove the special from the platform.

Cooper addressed the controversy surrounding "The Closer" during a brand new interview with Meltdown of Detroit's WRIF radio station. After confirming that he has seen Chappelle's special, John said (as transcribed by BLABBERMOUTH.NET): "I have thought for a decade Dave Chappelle is the funniest man alive. And I don't say that because he never offends me. [Laughs] I'm guessing that me and Dave Chappelle don't agree on a whole lot of stuff. He says plenty of offensive things about Christianity or about every race — white, black, Asian; anything you want — Dave Chappelle goes after 'em. I think that's why he's funny. I just think he's outrageously hilarious. That's not to say that I'm not offended. But he's hysterical.

"I've gotta be honest, and I know that we're in a time that everything that you say is going to make somebody hate your guys," he continued. "I don't wanna make anybody hate me, but I personally love — I love what he's saying. I should say I love what he's standing up for. And this is coming from somebody… Like I say, I'm a Christian. There are things that I will not watch because I find them offensive. But I have never called for someone to not have the platform, to be censored or something of that nature. Now, talking about actual violence is a whole another… that's a whole another thing, okay? I'm talking about actual violent talk. But in terms of things that we just say that's too offensive to say, that is not going to make for a freer country. That is going to make for a tyrranical… It's very puritanical. And we've also had puritan tyranny, as we saw in the Salem witch trials where you had this psychotic madness coming, all these Christian people to start going out hunting for witches. We don't want that. And that's kind of my own people, if you will. When I say 'my own people,' I don't mean that I am a witchhunter, but I hope that makes sense. Those were Christians doing things they shouldn't be doing. We don't want that. But we also don't want this new puritanism that says that you can't say something from an ideological perspective, from a political perspective, from a religious perspective. We don't want that. That is gonna create a culture where people are afraid to talk."

Cooper added: "And so I actually am very supportive of Dave Chappelle. Whether he offends me or not, I'm supportive of what he's saying. I'll tell you someone else I support that says a lot of things I agree with who also hates — I don't mean he hates Christians, but he hates Christianity, is [comedian and television host] Bill Maher. I agree with Bill Maher all the time, and I have for a decade. He says tons of things I disagree with, but he says lots of things that I think are poignant and interesting, and I don't want him canceled. No matter how much he thinks religion is stupid, I like hearing what he has to say, and I appreciate that I think that he thinks that I should have the ability to say what I wanna say."

SKILLET will release its new studio album, "Dominion", on January 14, 2022 via Atlantic.

In various interviews over the years, Cooper has said that he "always had faith in God" and that his mother was a "Jesus fanatic." He also claimed that he was willing to put his career on the line to take a stand for Christ.