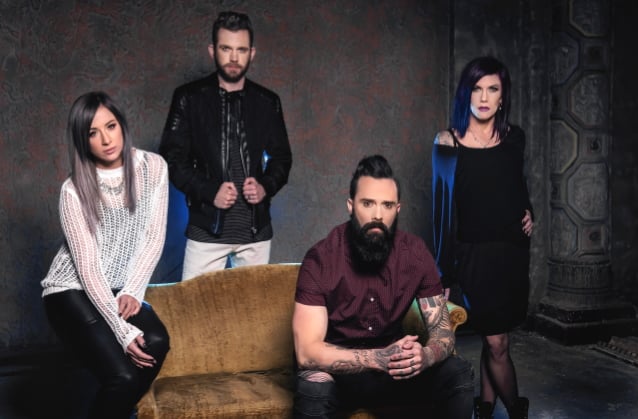 The new "reimagined" version of SKILLET's song "Save Me" can be streamed below. The original track is taken from the band's tenth full-length album, "Victorious", which was released last August via Atlantic.

SKILLET frontman John Cooper told Cryptic Rock: "'Save Me' was a song where I had written the chorus melody… I was thinking I could almost hear [FIVE FINGER] DEATH PUNCH doing that chorus. Then I said, 'I just think that this could really be a SKILLET song.' Instead of moving towards ultra-metal, it can move a little bit towards romantic and sad. Then when we started recording it and working on the parts, I was, like, you know what? It can be sad and metal at the same time. I literally thought, 'If this was a FIVE FINGER chorus, what would they do on the drums?' I know it doesn't sound like FIVE FINGER — it sounds like SKILLET — but for a musician, if they really picked apart the guitar and the drum parts and the chorus, you can hear that being a DEATH PUNCH chorus with his voice — if Ivan [Moody] was singing it. Some bands don't like to admit stuff like that, but I do. I like to pay homage to bands that I love, because I don't have much of an ego — I think it's cool. So, I can hear Ivan sing it.

"I wanted to make the song kind of sad, because the lyric is very romantic, actually. It's dark-sounding, but it's about the fact that intimacy is really hard. We all want to be known and we all want to know someone in an intimate way, but what we're not always prepared for is that intimacy hurts. The second verse lyrics — 'Peel back the skin, exposed to you / Take pleasure in the pain' — what that's saying is that it's really wonderful to be known, but it also hurts because we have a lot of ugly crap inside of us. It's not always wonderful when somebody finds out how selfish of a person you can be, or what a jerk you can be in the mornings when you're in a bad mood; the way you respond to someone you love when you're exhausted and they find out how bad you are. But it's still wonderful to be known, and to still be loved is a really wonderful thing to me, and that is what 'Save Me' is about. And we get to show off a little bit: the bridge on that song has got some riffage. When we've been playing it live, somebody was, like, 'I had no idea SKILLET could play like that.' I was, like, 'Son.' [Laughs]"

Coupled with the production strides made in the previous full-length studio offering, 2016's "Unleashed", John and wife/guitarist/keyboardist Korey took the reins for the bulk of production on "Victorious" — a career first.

"'Unleashed' recharged us, and we returned to what we love about writing," John said. "It was tight and electronic hard rock. We wanted to keep the sound modern and pull in influences from hip-hop drums and keyboards, while staying riffy. 'Victorious' started there. Our confidence was sparked by the last record and all of the other projects. We were feeling prolific. We thought, 'We can produce our own SKILLET album.' It lit a fire. Korey and I have produced in the past, but nothing quite like this. It's a brand new season."