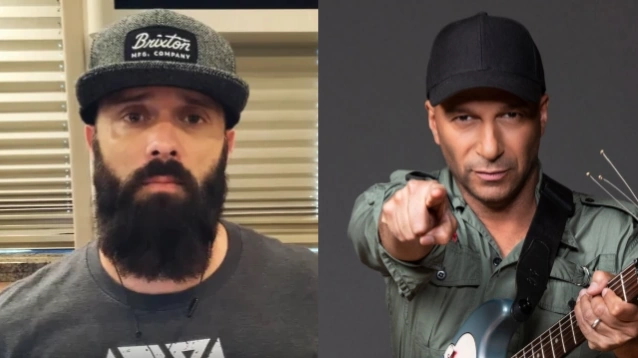 John Cooper, the frontman for the Grammy-nominated Christian rock band SKILLET, has pushed back against the criticism he has received for his comments about COVID-19 vaccine mandates.

During an appearance on Apologia Radio, hosted by Luke Pierson, a pastor/elder at Apologia Church, the 46-year-old vocalist/bassist, who previously publicly revealed that he was unvaccinated, addressed the reaction he has gotten from the mainstream media and audience for his assertion that vaccines are a tool of government control.

Cooper said (as transcribed by BLABBERMOUTH.NET): "It's a crazy time because there's, like, a collective mind losing. It's true — the whole country, we've lost our minds.

"In general, I think, I'm a fairly gracious person, or I try to be, where it's, like, I really don't care, Luke, if you get the vaccine or not. And I don't know if you care if I get it. It doesn't matter to me. There's certain things that you can make a choice. But there's been this collective mind… I mean, people going crazy. I fully expect half the country to be eating grass.

"What's really weird to me is that I've been speaking out about my faith in Christ for a long, long time in the mainstream world," he continued. "Now, let's be honest — not everybody in the mainstream world is nuts about that. They don't necessarily love hearing about Jesus, but they have always put up with me — some have supported me even. But I'll tell you what: the most kickback I have ever received — ever — for my faith has been on my stance on vaccine mandates and mask mandates. It is as if I just — like the unforgivable sin.

"I said to my wife, I said the amazing thing that it shows me is that it wasn't the gospel quote, it wasn't the gospel of Christ that made them really, really angry — meaning, 'Jesus is the way, the truth, the life. No one comes to the father unless they come through him.' A lot of people didn't love that message, but they can deal with it. But they will not deal with you speaking out against the state. They will not deal with it. And what you're really witnessing is an actual you've spoken against their God. You did not bow down to Nebuchadnezzar's idol of gold. And it is the one thing you're not allowed to do. It's just been really amazing to me.

"So a lot the bands, they just don't know what to do," Cooper added. "And when I say 'they,' I mean we're in there too. We just don't know what to do, because you're in an entertainment industry that's largely driven by social media and media at large. And you're not allowed to speak anything against… I mean, you've got RAGE AGAINST THE MACHINE telling people that if they don't get a vaccine… RAGE AGAINST THE MACHINE has become the machine. It's crazy. I'm, like, wait a minute — I'm the revolutionary here? I'm the revolutionary and RAGE AGAINST THE MACHINE is just 'government rock' now. My older brother made up the term 'government rock,' which I find pretty awesome. I think it's pretty great — it's a great way to scoff at someone."

Last month, the Memphis, Tennessee-born Cooper, who lives in Kenosha, Wisconsin, said that COVID-19 vaccine mandates are "much more about tyranny than they are actually keeping people safe."

During the summer, Cooper opened up about his reluctance to wear masks, saying: "The issue of the mask wearing, to me, is nothing more than theater. It is making me jump into an unreality, something that I do not believe, just to acquiesce to either the overlords — overlords meaning government, Big Tech [Editor's note: A name given to the five largest and most dominant companies in the information technology industry of the United States — namely Google (Alphabet), Apple, Facebook, Amazon and Microsoft], big business, big media, whatever — to acquiesce to what they want me to do. Even though I know that it's not true, but I'm gonna play the game. And every time I put my mask on, I know that I'm doing something that I do not believe in. In other words, I'm being forced to lie… I'm being forced to jump into something I don't believe, and I'm living by a lie — I'm living by a lie that this mask is actually gonna keep me safe from all harm. To acquiesce to the government, which says that I'm believing something that I know that I don't believe. So now I'm basically living in a fantasy world. That frightens me. And every time I put that mask on, that's basically what I think. I know I'm doing this, I know it's show, I know it's theater, I know my overlords don't even believe in it, because if they did, they wouldn't be breaking all of their own rules."

Experts have repeatedly said that mRNA vaccines are not new. In fact, they have been in development for decades — since the 1970s— and many mRNA vaccines were in phase 1, 2, and 3 trials before the COVID-19 vaccines were created. According to News Center Maine, messenger RNA vaccines teach our cells how to make a protein that will trigger an immune response inside our bodies. Our cells break down mRNA and get rid of it within a few days after vaccination. As for the vaccines being "experimental," the U.S. FDA and CDC both said Pfizer and Moderna's data were highly scrutinized and that the shots were required to undergo the same testing, trials, and analysis before getting emergency use authorization.

Wearing face masks and coverings is recommended, or in some places mandatory, in public spaces to help stop the spread of COVID-19. But anti-maskers think government orders requiring face coverings in public spaces or those put in place by private businesses violate their constitutional rights.

Studies have shown that masks limit the spread of the coronavirus by blocking respiratory droplets that can travel through the air when someone coughs, sneezes or even just speaks. There is also strong evidence to suggest that masks help protect others from catching the virus from the person wearing the mask.