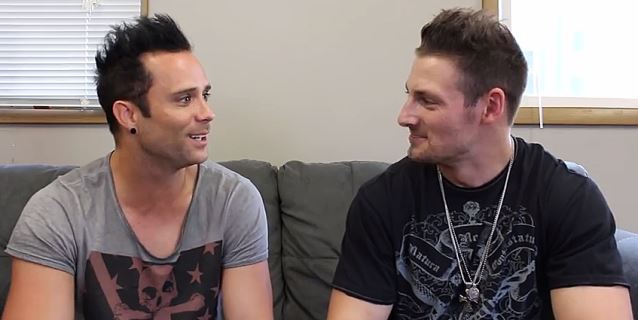 TheRockRevival.com's Matt Bishop conducted an interview with SKILLET frontman John Cooper backstage at Musikfest 2013 on August 4 at PNC Plaza in Bethlehem, Pennsylvania. You can now watch the chat below.

SKILLET's new album, "Rise", sold 60,000 copies in the United States in its first week of release to debut at position No. 4 on The Billboard 200 chart.

The CD's explosive start was fueled by the success of a four-song rollout at iTunes which saw the first two tracks, "Sick Of It" and "American Noise", both hit No. 1 on the iTunes Rock Songs chart (and at one point, were No. 1 and 2 on the chart), while the third and fourth-released songs, "Rise" and "Not Gonna Die", each shot to No. 2. The band has also been building momentum with radio promotion, a social media blitz and festival show performances.

"SKILLET has become increasingly deft at straddling the tricky line between faith-based idealism and secular universality," wrote Billboard. "'Rise' takes the balance a step further, mixing new sonic flavors into the group's hard-rock bombast." USA Today gave the album 3 out of 4 stars, People praised the band for "taking their hard rock to higher ground," and Loudwire gave "Rise" 4 out of 5 stars and wrote, "the songwriting has more depth, there's added diversity and plenty of potential hit singles."

Following performances at several major festivals, including Rock On The Range and Rocklahoma, SKILLET (vocalist/bassist John Cooper, guitarist/keyboardist Korey Cooper, drummer/vocalist Jen Ledger and guitarist Seth Morrison) have hit the road with SHINEDOWN on the Carnival Of Madness tour. They'll follow by heading overseas for their first-ever tour with NICKELBACK, a month-long jaunt that will see SKILLET playing Milan, Paris, Vienna, London, and many more.