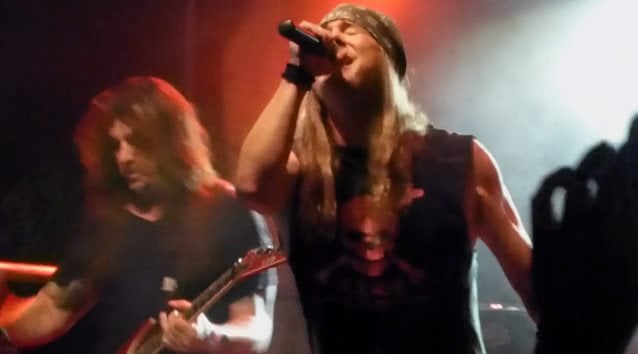 SKID ROW guitarist Dave "Snake" Sabo says that he doesn't have any issues with people who come to see his band perform live believing singer Sebastian Bach is still a member of the group, explaining that the fact that they are spending their hard-earned money to attend a SKID ROW concert is a compliment in itself.

In 1999, SKID ROW reformed and, after a bit of shuffling over the years, now features a lineup consisting of original bassist Rachel Bolan and guitarists Sabo and Scotti Hill, alongside drummer Rob Hammersmith and vocalist Johnny Solinger.

During a recent appearance on "Talk Is Jericho", the podcast of Chris Jericho, the world champion pro wrestler, actor, New York Times best-selling author and lead vocalist of the metal band FOZZY, Sabo was asked if there are still fans who buy SKID ROW concert tickets who are unaware of the fact that the band has been fronted by Solinger for more than 15 years.

"Yes," he said. "I find it amusing. I mean, you know what?! How can you judge stupidity?

"Johnny, he's fine with it. The thing is, with him, he's a guy, he's a singer of SKID ROW with long, blonde hair, and some people might not be aware [that Sebastian is not in the band anymore], [they] just are not in the loop anymore, if you will. I get it. It's fine."

He continued: "To me, it's all a compliment regardless. It means at least they're familiar with the band on some level, at least they recognize some of the songs, at least they're taking a chance and coming to see it. Now if they walk away and they're bummed, that sucks and I'm bummed about that, 'cause that means I didn't do my job to the best of my ability, at least in my own Polish brain. But at least if they're giving it a shot, [it's] all good with me, man."

In a recent interview with UK's The List, Sabo was asked why the band split with Bach back in 1996. "It's really simple — sometimes people just don't get along anymore, they don't see eye to eye," he replied. "They want things their way, and I mean that from all sides. I take responsibility for my role, but I felt, personally, and I can't speak for anyone else, the time had come."

He added: "I'm so proud of what we accomplished in the ten years we were together [with Sebastian], but I'm also proud of the years that came afterwards.

"I have no ill will against anybody. I know how hard it is in this business."

Asked what his relationship with Sebastian is like these days, Sabo said: "Oh I don't have any. And that's okay. Life is really complicated, so I tend to simplify it as much as possible. I don't want any stress or drama in my life, so if my relationship with someone promotes that, I tend to move away from them, and that's what happened back in the day."