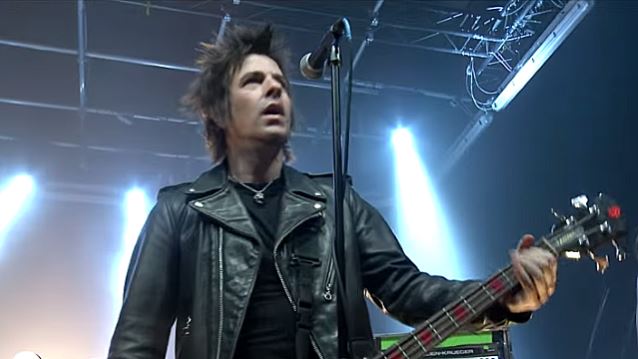 Canadian rock journalist Mitch Lafon of the "One On One With Mitch Lafon" podcast (Facebook page) conducted an interview with SKID ROW bassist Rachel Bolan earlier in the week. You can now listen to the chat below. A few excerpts follow (transcribed by BLABBERMOUTH.NET).

On singer Johnny Solinger's statement that he "decided to leave SKID ROW to pursue [his] solo career:

Rachel: "Yeah, we released him. The statement that [he] made wasn't really… the right thing to say on his part. But, yeah, we let him go.

"Had we both done the same thing, [the announcement] could have just been [that] we parted ways amicably. But, you know, it is what it is."

On what led to SKID ROW's decision to fire Solinger:

Rachel: "It was evident. There were certain things going on out on the road that kind of set us thinking… Things had been going on for a little bit. And, you know, I'm not here to say anything bad about the guy.

"At certain times, you just get the feeling someone isn't putting a hundred percent into things. And SKID ROW is very important to the rest of us. And we wanted to carry on with quality performances and quality songs, so we decided to make a change."

On SKID ROW fans expecting the band to reunite with singer Sebastian Bach following the split with Solinger:

Rachel: "Yeah, that's why we made the call to Johnny [telling him he was out of the band] and announced [our new singer] Tony [Harnell] the same day. Because we knew if we had let Johnny go a couple of months ago when we had started working with Tony, that would be the thing everyone would be thinking.

"There's no real way to win that situation. People are gonna think that there's gonna be a reunion no matter what. But the fact of the matter is there's not, and it's all about SKID ROW with our new singer, Tony Harnell."

On how Tony Harnell came to be SKID ROW's new singer:

Rachel: "We've known Tony for years — literally, probably since the beginning of our career. And although I wasn't a big TNT fan, I was a Tony Harnell fan, as [were SKID ROW guitarists] Snake [Dave Sabo] and Scott [Scotti Hill]. When we made the decision to ourselves that we were gonna start looking, Tony's name came up. And I was, like, man, it's so funny, 'cause a couple of years ago, I was up in New Jersey for Christmas and I met with Tony in New York and I had dinner with him and another friend. And we just started talking. And he's, like… He goes… We'd known each for a long time, but at that point we hadn't spoken for a while. He's, like, 'I hear you guys are doing good things. How's it going?' I said, 'It's going pretty cool.' He goes, 'Man, you guys should have called me when you got a new singer [back in 1999].' And I guess that kind of popped up in the back of my head when we knew we were gonna make a change. And we immediately got in touch with Tony. The thing that really hooked us in was his performance with Michael and Oz from STRYPER when they did 'More Than A Feeling' acoustically [see video below]. And, man, we were just, like… He still has his pipes. He still has his pipes, he looks cool… 'Let's give him a call. Let's see how this works.' And so we started working with him in a rehearsal situation and things went realy well and we made a decision. And we actually recorded a song and shot some video, so that'll be coming out… and announcement on that will be coming out in the next few weeks."

On whether he is nervous about the fact that very few bands have managed to pull off a successful singer change twice in their careers:

Rachel: "It is what it is. Plus the reaction [to Tony being the new SKID ROW singer] has been so overwhelmingly positive online. I mean, the haters are gonna hate, and that's that, but it has been such a small part of what's been going on online… People are really into the idea and are really looking forward to it. So it's up to us to go out there and really deliver."

On whether SKID ROW is working with Harnell on a "trial" basis or if Tony is "the guy" for the long haul:

Rachel: "He's the guy. I mean, that's where we're at in our heads. It's not a temporary thing. But, you know… [laughs] if get gets sick of us and leaves, then that'll be a different situation. But things are going really well now. And we're very excited. We're very excited about our future, very excited about getting on the road. And we're gonna be announcing a lot of dates in the next few days, so we're so excited, I can't even explain it to you."