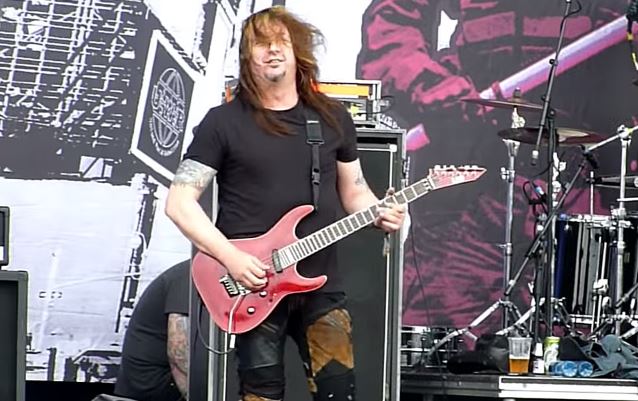 "I manage the band DOWN, and I've been doing that for nine years now, and [it's] something that I absolutely love," he said. "I get to work with my friends. And I think they feel that they can trust me, that I'll always be on their side. I'm always on the side of the artist. So if I'm dealing with a record label or other managers or whatever, I'm always going to defend the people that I work with. Phil and I have a 20-year history together, and I have to protect that and I have to protect that band, and it's one of the most important things in my life. So it's not a chore, and it's not a job — it's something that I cherish."

In a 2010 interview with Music Consultant, Sabo spoke about how being observant of SKID ROW's early business dealings served him in his career. "It served positively and negatively," he said.

"There's something great to be said about an artist who is just an artist and goes out and has been able to position themselves with a team. They just go out there and do their gigs, write the songs, go out and perform to the best of their ability, tour and record. In that case, their business would be handled by their team. There are a lot of artists out there like that. I wasn't one of them.

"For some reason, I always want and need to know how things work. I was always interested in statistics and things of that nature from the time I was really small. When I was playing in bars in New Jerey, I was the one collecting money, going out and booking shows, dealing with the club owners and getting screwed over, getting taken advantage of as a 16-year old kid underage. What legs did I have to stand on? All I could do is stand there and be strong and respectful.

"It's funny, because even while you're getting screwed, sometimes as a kid, if you just stand tall and are not a dick, that reputation begins to follow you. People say, 'He's a good guy to work with and a good guy to deal with.'

"I always think, regardless of what has happened, I've been a pretty stand-up guy doing the right thing and have been good to people and treated people with respect and I have never taken myself too seriously. That fell into every project I worked on from the time I was playing in cover bands to the time I was starting SKID ROW.

"In the beginning it was more of the same; I was dealing with the club owner or dealing with a booking agent on a very local level. You still had to go through the business of it though and I liked doing that. As the business of SKID ROW got bigger, my interest and participation in that also grew. And it was great because I had and have two amazing teachers in Doc McGhee and Scott McGhee. And also learning from Jon Bon Jovi and his work ethic, and the amount of knowledge he amassed and passed on to me. In that aspect, it helped me out immensely in that at least I understood what was going on around me, and I wasn't in the dark. So I was able to make educated decisions. Whether I was right or wrong, at least I was able to be educated in where my decision came from. I loved all that and still do.

"I think the progression from being in SKID ROW to being in management was a very natural progression. The trick of it was, 'How do you actually make that leap?' Luckily for me, the McGhees are my family and have been for the last [27] years.

"No matter what, the one thing I can say is that we're not a corporate company and are more of a boutique management company — it's a family atmosphere. I know and have always knows that if anybody is ever in trouble with anything, they can always come to me. And I know if I'm ever in trouble, I can always go to them. Doc and Scott have been there for me many times. There are so many other people that I've been fortunate enough to meet and get to know in this business who have been able to impart their knowledge and wisdom and experience upon me. I take all this as a gift and a blessing."