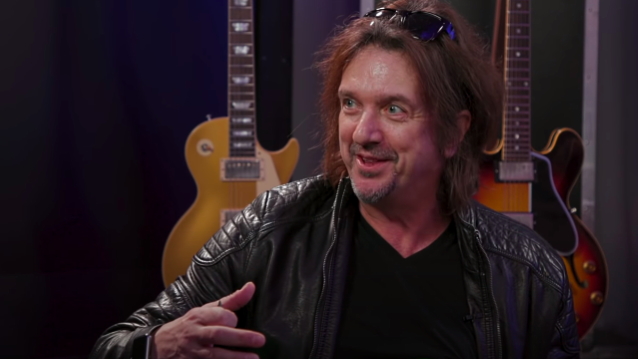 Of his collaboration on the Snake Baretta model, Snake states: "The attention to detail and adherence to the legacy is profound. I've never had a signature guitar, so to say I'm humbled would be an understatement.

"When I put the Snake guitar away 25 years ago, I never thought it would be resurrected, much less through a Kramer [Gibson] partnership! I'm so proud and grateful to be a part of this and the history this represents."

This past December, Sabo told Planet Rock that SKID ROW was putting the finishing touches on the final chapter of the "United World Rebellion" trilogy, which will tentatively be released later this year. The disc was tracked at a Nashville, Tennessee studio with producer Michael Wagener, who also helmed the group's 1989 self-titled debut and 1991's "Slave To The Grind".

SKID ROW's new album, which will be made available through Australia's Golden Robot Records, will feature collaborations with several outside songwriters, including Corey Taylor (SLIPKNOT, STONE SOUR) and Lzzy Hale and Joe Hottinger of HALESTORM, a group that covered the title track of "Slave To The Grind" on its "ReAniMate: The CoVeRs eP" in 2011. SKID ROW also worked with songwriter-for-hire Marti Frederiksen, who has previously collaborated with AEROSMITH, DEF LEPPARD, Jonny Lang and Sheryl Crow.

In January 2019, Rhino released a 30th-anniversary remastered digital reissue of SKID ROW's quintuple-platinum 1989 debut album, which featured the hits "Youth Gone Wild", "18 & Life" and "I Remember You". The reissue also includes "Forever", a b-side recorded during the sessions for the album that previously appeared on the 1998 greatest-hits compilation "40 Seasons: The Best Of Skid Row", and a 10-track live performance recorded on April 26, 1989 at the Marquee in Westminster, California.