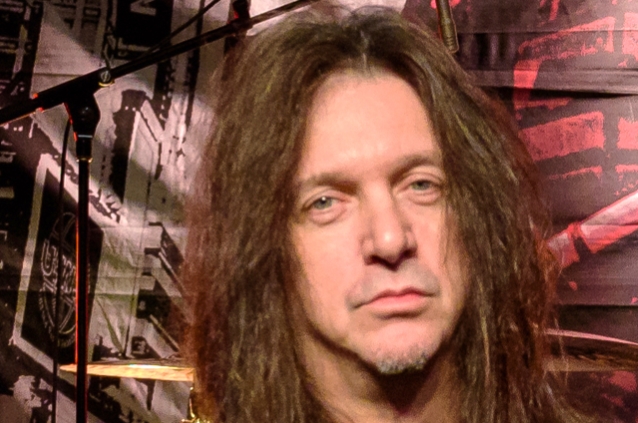 Ex-SKID ROW singer Sebastian Bach says fans shouldn't hold their breath for a reunion of the band's classic lineup. Asked in a new interview with Rolling Stone what it would take for the band to be reunited, Bach said: "It would take those guys to realize that I have a lifetime manager. His name is Rick Sales. I've been with him since 2006. They don't want to deal with a guy like that. They want to give some singer who doesn't have a manager $700 to $800 bucks a week. I've got a team that's worked with me and don't allow me to get fucked around. I didn't have that team when I was 19 years old."

In response to Bach's statements about the earnings of SKID ROW's singer, guitarist Dave "Snake" Sabo told Rolling Stone in an e-mail: "I guess fact-checking isn't in his skill set… The five of us go on that stage as a band and we all get paid equally. We're in this together. There's no egos."

Sebastian went on to say that SKID ROW was "close to reuniting maybe two years ago, or a year ago or something like that, but then it didn't happen. The fact that it didn't happen obviously makes me somewhat bitter, because life is only getting shorter, as the song says," he added.

"I wouldn't say 'came close,'" bassist Rachel Bolan told Rolling Stone in an e-mail response to Bach's account of the reunion talks. "We entertained the idea. Snake and I went as far as talking with agents and promoters about money. But we quickly learned after a few text conversations, why we fired him in the first place. Nothing is worth your happiness and peace of mind."

Sabo added: "It was already a miserable experience and we didn't even get on the phone."

Bach recently issued an "open invitation" to the other members of SKID ROW's classic lineup to "get onstage and jam" during the vocalist's upcoming tour, in which he will celebrate the 30th anniversary of the band's self-titled debut by performing the album in its entirety. Drummer Rob Affuso — who left SKID ROW in 1998 and claims to be "the only former member that keeps in contact with all former SKID ROW bandmates and is still good friends with them all" — subsequently responded to Bach on Facebook, writing, "Sure! I'll be there dude." A few days later, during an interview with Finland's Kaaos TV, Sabo confirmed that he would not accept Bach's latest overture. "I'm working with my band," he said. "This is SKID ROW, and this is what I do."