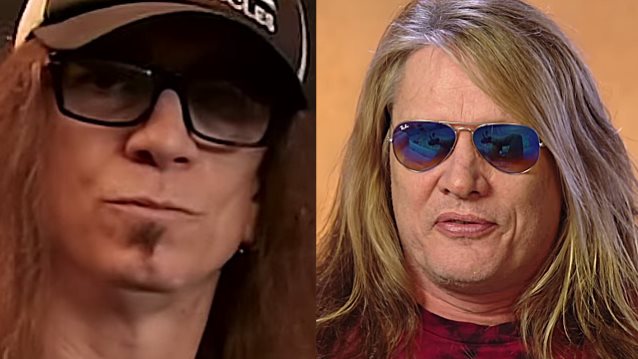 SKID ROW guitarist Scotti Hill has ruled out the possibility of a reunion with singer Sebastian Bach, explaining he and his bandmates don't want to "put ourselves in a volatile situation and be unhappy and destroy what we have now."

In 1999, SKID ROW reformed and, after a bit of shuffling over the years, featured a lineup consisting of original bassist Rachel Bolan and guitarists Dave "Snake" Sabo and Hill, alongside drummer Rob Hammersmith and singer Johnny Solinger.

During an appearance on the August 7 episode of "Another FN Podcast", Hill was asked if it's true that Bach was relieved of his duties from SKID ROW when he reportedly booked the group to open for KISS without first consulting his bandmates. "That caused a giant uproar is what it did, and [Sebastian] did something to Snake that was unacceptable," Hill revealed (hear audio below). "He called his house on Thanksgiving and said some horrible things into his answering machine, and Snake says, 'You know what? I'm not gonna be in a band with you anymore.' There you go. It's as simple as that."

Hill also talked about SKID ROW's decision to take a break following Bach's departure from the band. He said: "Well, at that point, grunge had come into play. We had done 'Subhuman Race'. It's a cool record; it's got its moments. And then we had gone out and done that tour and it was a failure. And at that point, with everything that was going on internally in the band, something was gonna give, and that just happened to be what it was. Everybody had had enough of everything, and it wasn't worth it for anybody to leave the house for that. So when that happened, we just all stopped calling each other. We had been on the road a lot, man. I mean, we went out on that first tour — it was sixteen months — we came home, we did a record, we went back on tour for twenty-two months, we came back home, we did another record, we went on… We were out for a long time, but those first two tours were really long. For people that get along, that will wear thin. So when there's lots of turmoil and stuff like that, it's hard to go on. So with all that combined, you've got guys that just were, like, 'All right. I need a break.'"

According to Scotti, he didn't see any of his bandmates for "probably a year" until he, Snake and Rachel "started a little side project," the aforementioned OZONE MONDAY. "We just wanted to try something different — whatever comes out comes out — not particularly for heavy music, or any kind of music," he explained. "But after a while, that just wasn't feeling right. And I remember Snake and I were going to New York one day, we were on the ferry riding over there, and he was, like, 'Would you be interested in doing SKID ROW with a different singer?' I was, like, 'Yeah. People are gonna freak out, but they can start their own fucking band then — do it the way they wanna do it. This is what's happening.' So that's what we did."

Hill called SKID ROW's relaunch "very difficult" and described the band's journey as "a battle to get where we're at now. We're out playing now and we're having a really good time," he said. "But it was a battle — it was really down in the fucking shitholes again, and the vans and the RVs and the shitty hotels, when you get them, and we worked our way up."

Despite the fact that rebuilding the SKID ROW brand has been anything but easy, Hill is adamant that he has no interest in a reunion with Bach. "No. That door is closed," he said. "There was talk about it, the two camps went back and forth, and it was not to happen. So that door is now shut."

Asked if that means that the split is "forever" and that there will never be a SKID ROW reunion with Sebastian, Scott said: "Yeah. I believe so." He added: "I tell you what: our singer, ZP Theart, he's a brother, man. He's a great fucking singer, he's a great frontman, he's a guy I look forward to seeing, a guy I look forward to hanging out with. We trust him with the band that we've been in all this time, and that is precious to us. We can go out and play and enjoy ourselves."

Hill said that while he understands fans' desire to see a SKID ROW classic-lineup reunion, he won't forsake his emotional well-being for a bigger paycheck.

"We appreciate fans — we do," he continued. "We're probably the most fan-friendly band you'll ever meet. I meet people all the time, and they say, 'You guys are so friendly, 'cause we met this band last week and they were assholes.' Or, 'We met this band' — we hear this shit all the time. We'll go out in the cold, we'll hang out with them, but what we won't do is put ourselves in a volatile situation and be unhappy and destroy what we have now."

Despite the fact that he is not keen to play in a group with Bach again, Hill is complimentary of his former bandmate's skills.

"He's not a rock star, he's a superstar, man," the guitarist said. "He's great, dude. I totally realize what he is. I'll speak for myself: he is a guy… he'll cut his own throat to do a good show. He puts it all out there. He's a great singer and a great frontman — one of the all-time greats. But we're not working together. To replace a guy like that is… Well, yeah, you realize what you're up against. People are, like, 'They have no idea…' Yeah, we have an idea — of course we do. But that was the only way to do it. And the records he did with SKID ROW are great — he did a great job. And he was just such a huge part of that. But it just can't happen. Replacing a guy like that, yeah, it's hard, it's hard."

Scotti also made it clear that he didn't fans to blame one member or another for the demise of SKID ROW's classic lineup and the failure of any previous reunion attempts.

Bach has consistently expressed his desire to reunite with his former bandmates, telling Loudwire last year: "I don't have any reason why not to do that. I have no animosity towards anybody in SKID ROW, and the fact that we're all, five of us, still alive in this world is a pretty amazing feat. So I would someday definitely like to hear the five guys who made those records play live together again. Yes, I would. 'Cause I'm a fan too." He added: "I'm up for it, if they are."

Despite having played sporadic shows with SKID ROW for more than a year, Theart wasn't officially announced as the band's new frontman until this past January.