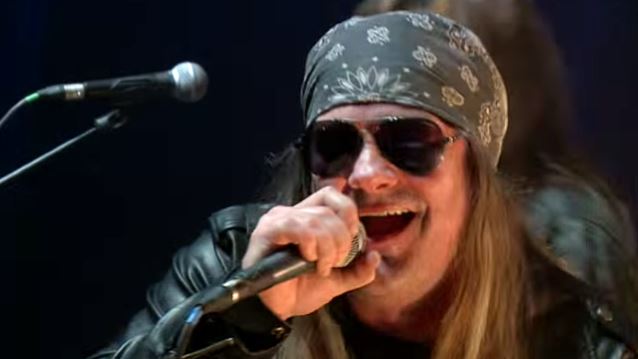 SKID ROW fired singer Johnny Solinger (pictured) over the phone a few hours before announcing ex-TNT vocalist Tony Harnell as his replacement, the band revealed in a new interview.

Solinger, who joined SKID ROW in 1999, released a statement on Monday (April 6) claiming that he had "decided to leave SKID ROW to pursue [his] solo career."

However, during an appearance on yesterday's edition of Eddie Trunk's SiriusXM satellite radio show, "Eddie Trunk Live", SKID ROW guitarist Dave "Snake" Sabo and bassist Rachel Bolan disputed Solinger's version of the split, saying that it was them who "made the call and informed" Johnny that "we were making a change and we were gonna be going forward as SKID ROW with a new singer."

Asked about the circumstances that led to Solinger's exit from SKID ROW, Sabo said: "First of all, it's one of those things where there's no animosity with Johnny at all, from our standpoint. But it felt like it was just time for us to make a change."

He continued: "We have been feeling this way for a little while.

"We're thankful for the fifteen years that we had with Johnny. But it just felt like it was just time that we needed to make a change. And Rachel, Scotti [Hill, guitar] and I and Rob [Hammersmith, drums] spoke about it, and we just felt that if we're gonna do something, we should do it now."

Regarding the fact that Solinger announced that it was he who made the decision to leave SKID ROW, Snake said: "Contrary to what he may be saying — and this is not a 'he said, she said' thing — this is something that we had discussed for a while. And it was our decision and we made the call and informed him that we were making a change and we were gonna be going forward as SKID ROW with a new singer."

Added Rachel: "Without bagging on the guy… There's still a connection, hopefully, there with him, because we were all brothers at one time. It just became evident a while back — not a long while, but maybe a year or so — that it just… Everyone was going in a different direction, as far as him and the band. And we just wanted to be the best band we could be, and I think Johnny had a different idea for quality. So it was just one of those things, man. We talked about it and we wrestled over it, and we were, like, this is SKID ROW. This means a lot to us. We started this over 25 years ago. And it's something that sucks doing, but we're okay with doing it, 'cause this is SKID ROW. This is our lives."

Asked if there was ever a time where they felt things were "clicking" and "100 percent right" between Solinger and the rest of the band, Rachel said: "We were clicking big time. I thought we made a lot of great music together. And even with [the ongoing trilogy of] EPs, when we were in the studio, we were making great music. Snake and I would write, and everyone came in and really sunk in. I think it was when we were in the studio that it really became evident that we all didn't have the same heart and soul… We weren't all putting the same heart and soul into it. And it's just one of those things, man. It's rough to make a decision like this, but we did, and we have someone in place, and it's been awesome."

Added Snake: "This has nothing to do with Johnny not being a good person; he's a really good person, and we all got along well. There's no animosity at all from our end. And these are terrible decisions to make, man. They're awful. The guy's been with us for fifteen years, and we saw a lot of miles of road together, and I feel extremely fortunate to have spent that time in a band with him. And he's a great singer and he's gonna be fine. He's gonna pursue his solo stuff, I guess, and that's what he should do. And for us, we're moving forward. We're excited about the future. These things are never easy. They're life-altering decisions, you know. But it's a decision that had to be made, from our standpoint, and we made that decision. And we basically said to Johnny that we're making a change and getting a new singer."

Sabo also revealed that SKID ROW's decision to fire Solinger came as a surprise to the singer and that Johnny received the call informing him of his dismissal from the group on Monday morning.

Harnell will make his live debut with SKID ROW on May 23 at Dakota Dunes Casino in Saskatoon, Saskatchewan, Canada.