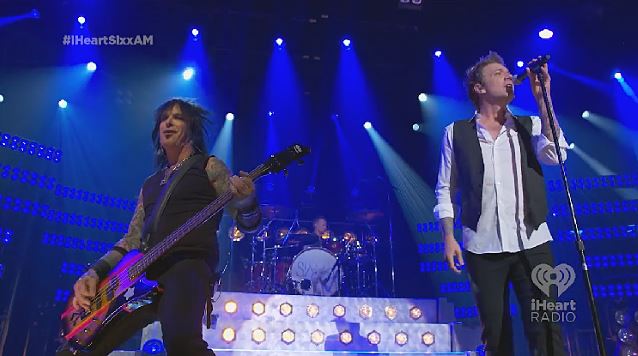 SIXX: A.M., the band featuring MÖTLEY CRÜE bassist Nikki Sixx alongside guitarist DJ Ashba and vocalist James Michael, released its third album, "Modern Vintage", on October 7 via Eleven Seven Music. SIXX: A.M. celebrated the CD release by playing its first full live show since 2009 the same night. The performance took place at the iHeart Theater in Burbank, California. The show, as well as a question-and-answer session with the band about the new album, its influences and the band's future plans was broadcast exclusively live on iHeartRadio and select Clear Channel radio stations.

Professionally filmed video footage of the performance can be seen below.

Says Sixx: "Fans have been asking for years, 'When is SIXX: A.M. gonna tour?' and we've finally announced our first headline tour.

"We can't wait to play these songs live and put on a rock extravaganza for our fans.

"We're excited to announce that we're bringing along APOCALYPTICA as special guest because we are fans of their music and think this is going to be an amazing night of music from beginning to end."

Says Michael: "For three records now, we have been envisioning what a SIXX: A.M. headline tour would look and feel like. We are so excited to finally be bringing these songs to life." Ashba adds: "Over the years, we feel we have taken our fans on some pretty incredible and diverse musical journeys. However, they have only been able to experience half of our vision. For the first time, we are going to present a visual journey to go along with the music. This tour will be something you won't want to miss. This will be the ultimate SIXX: A.M. experience."