A new song from SIX FEET UNDER entitled "Involuntary Movement Of Dead Flesh" is available for streaming on the band's MySpace page. The track comes off the group's new album, "Death Rituals", which is scheduled for release on November 11 via Metal Blade Records. According to a press release, the CD "features 12 tracks of pure American death metal delivering a bludgeoning slab of metal that will leave fans hungering for more. Legendary death metal vocalist Chris Barnes, along with guitarist Steve Swanson, bass legend Terry Butler, and drummer Greg Gall, continue to follow the dark and demented path that merges what Outburn magazine calls 'tried-and-true death groove' with stomach-turning lyrics and themes. 'Death Rituals' saw the band returning to Morrisound Studios in Tampa, Florida with Chris Carroll at the helm with mixing duties being handled by Toby Wright and the return of SIX FEET UNDER's old friend Bill Metoyer, who recorded the band's CD 'Warpath', helping out with recording of the drums."

SIX FEET UNDER has scheduled a CD-release party/in-store signing on Saturday, November 15 at 5:00 p.m. at Sound Exchange of Brandon (732 West Lumsden Road) in Brandon, Florida.

SIX FEET UNDER filmed a video for the song "Seed Of Filth" at the band's October 31 concert at Gasoline Alley in Largo, Florida.

Fan-filmed video footage of SIX FEET UNDER's performance at this year's Metalcamp festival, which was held July 3-9, 2008 in Tolmin, Slovenia, can be viewed below (clip uploaded by YouTube user "pulpulfolker"). 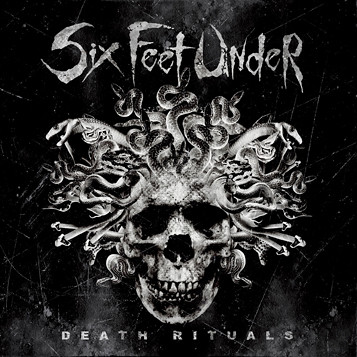