"Switchblade Serenades", the debut album from the Swedish female-fronted heavy rock band SISTER SIN, sold around 700 copies in the Unites States in its first week of release, according to Nielsen SoundScan. The CD debuted at No. 107 on the Top New Artist Albums (Heatseekers) chart, which lists the best-selling albums by new and developing artists, defined as those who have never appeared in the Top 100 of The Billboard 200.

SISTER SIN has been added to the forthcoming U.S. co-headlining tour featuring OTEP and ILL NINO. The band will also support ARCH ENEMY on a handful of dates in Germany, Switzerland and the Netherlands in December.

A behind-the-scenes look at the making of the first SISTER SIN video, "On Parole", is available below. The clip was filmed in late July in Stockholm with director Bill Schacht, who has previously worked with AMON AMARTH, DIO, ALICE COOPER and KING DIAMOND. The track is the first single off "Switchblade Serenades", which was released in North America through Victory Records.

"Switchblade Serenades" was produced by Tobias Lindell at Bohus Sound Studios in Sweden. 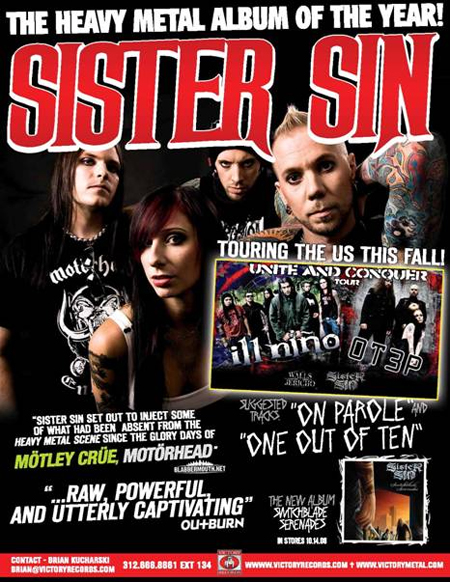