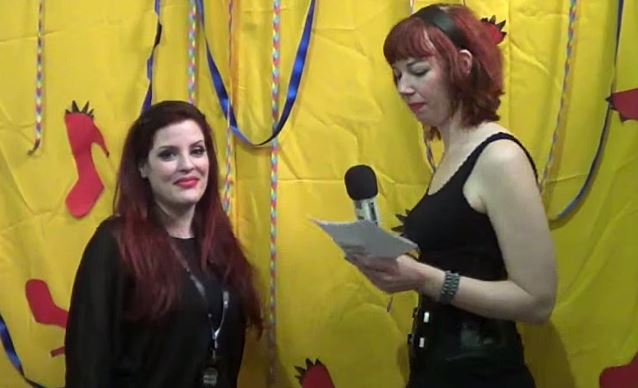 Metal-And-Highheels.com conducted an interview with singer Ailyn of Norwegian/Spanish symphonic gothic metallers SIRENIA at this year's edition of the Metal Female Voices Fest, which was held October 17-19 at Oktoberhallen in Wieze, Belgium. You can now watch the chat below. A couple of excerpts follow (transcribed by BLABBERMOUTH.NET).

On SIRENIA's expectations for its next album following the band's return to Napalm Records:

Ailyn: "I don't know. I hope we're going to tour a lot. Because for this album [2013's 'Perils Of The Deep Blue'], I think we just had two tours — like, small tours — and three festivals this year. So it's too little. My expectation is that we're going to [be on the road] more with this [next] album."

On SIRENIA's next album, which is currently being recorded:

On whether there are plans for SIRENIA to film a video for a song off the forthcoming album:

Ailyn: "Actually, we have no idea what are we going to do. Actually, we don't know which song will be the single. So, for now… We have an idea. There are some songs we like that until the album is… Well, I have to record [my vocals] yet… So until the album is done and mixed and everything, we cannot decide which song will be the best [choice for a single and video]. So after we decide, we can think about what kind of video we can do."

"Perils Of The Deep Blue" was released on June 28, 2013 via Nuclear Blast Records. The CD was produced by Morten Veland, while the mixing and mastering was handled by Endre Kirkesola at Dub Studios in Oslo.