"These days we are going through the final preparations for our next album. The songs are all finished and recordings will start in July. The album will be recorded in Sound Suite Studios, France and Stargoth Studios, Norway. The mixing and mastering will take place in Antfarm Studios, Denmark with Tue Madsen. We are really excited about this new album and can't wait to share the new song material with all of you. The album will be complete in September, and released early next year. We will keep you posted!"

SIRENIA recently recruited 25-year-old Spanish singer Ailyn (born: Pilar Gimnez Garca) as the replacement for Monika Pedersen, who left the group last fall after only one album due to "musical differences."

Ailyn is best known as a member of the young team in the Spanish version of "The X Factor", the biggest television talent competition in Europe.

SIRENIA previously commented in a statement: "SIRENIA is finally ready to introduce their new female singer. Ailyn born 1982 in Barcelona, now settled in Granada, Spain. Ailyn has been strongly attached to music all her life, and began singing at an early age. Later on she studied singing at The School of Music Albniz, and obtained singing lessons with several singing teachers around Spain. In the past she's been singing and performing all kinds of styles and genres, but in 2004 she discovered the sounds of metal combined with atmospheric and classical elements, this style of music made a big impression and she knew right away in which direction she wanted to take her career. SIRENIA has done pre-productions of several new songs and recognizes that Ailyn's voice match perfectly with the new song material. The band is very pleased to have Ailyn onboard and we all look forward to a future collaboration."

SIRENIA's latest album, "Nine Destinies and a Downfall", entered the German Media Control chart in March 2007 at position No. 54. The CD was recorded at Jailhouse studios in Norway with engineer Hans Eidsgard and Soundsuite studios in France with Terje Refsnes and was mixed and mastered at Antfarm studios in Aarhus, Denmark with Tue Madsen. 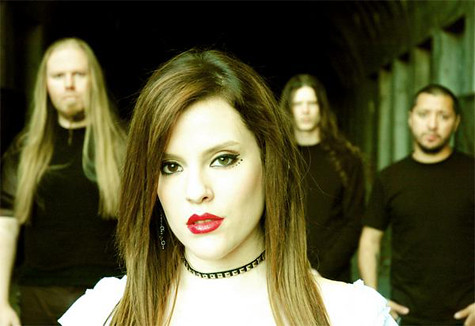