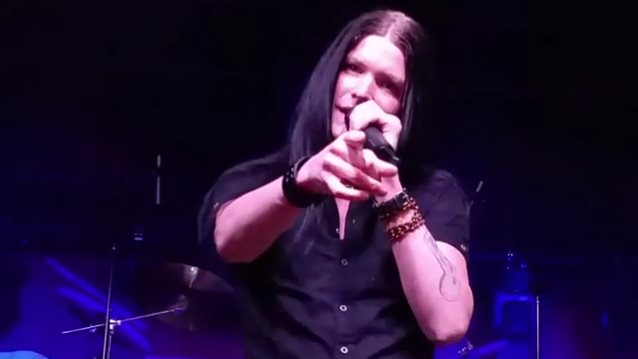 Singer Joshua Alan has quit Bobby Blotzer's version of RATT, explaining that he will be working and focusing on his original music this year.

Blotzer has spent the last year and a half battling the other three members of RATT's classic lineup over the rights to the band's name. At the same time, he has been hitting the road with his version of RATT, which, in addition to Alan, has most recently included guitarists Mitch Perry (TALAS, HEAVEN, STEELER, MSG, LITA FORD) and Stacey Blades (L.A. GUNS) and bassist Brad Lang (Y&T).

Earlier today (Wednesday, February 15), Alan released the following statement via his Facebook page: "As some of you may already know, I have resigned from my position with Bobby Blotzer/RATT as of January 23rd.

"I thank you all from the bottom of my heart for all of your love and support along the way! I would not have made it through this without you!

"I will be working and focusing on my original music this year.

"If you would like to catch me live, I will be doing solo acoustic shows throughout the year as well (what I enjoy most).

"With that being said, I have had an absolute wonderful time on this tour. I have met a lot of very good people and gained experience that I would not have otherwise. For that, I am forever grateful.

"I will leave you with this: What I believe is the most important lesson here for myself is that music is a universal language. It is a tool... a very powerful tool. It is intended to bring peace, love and unity. I believe that to use such a beautiful and powerful thing for any other means is a complete disservice to the people! Music is power... unity is absolute power. Let's enjoy music, and let it bring us together as it is intended to do!

"Much love, people! Look forward to seeing you soon!"

Blotzer has consistently praised Alan for his live performances with the drummer's version of RATT, saying that "he sings like the records sound, which never live used to happen with RATT. And I'm not here to sling mud, but I'm just telling you straight up."

Besides Bobby, Alan was the last remaining "original" member of Blotzer's version of RATT which made its live debut in late 2015.

Back in November, a California judge ruled against Blotzer with respect to whether bassist Juan Croucier had committed trademark infringement by using the RATT name and logo to advertise his band RATT'S JUAN CROUCIER in the fall of 2015. The judge furthermore decided that the corporation WBS, Inc. — of which Blotzer and guitarist Warren DeMartini were thought to be the sole shareholders — did not have ownership interest in the RATT marks and that the name and brand was still owned by the members who were part of the original RATT partnership agreement.

In addition to claiming to have expelled Blotzer from the partnership following the November court ruling, DeMartini, Croucier and singer Stephen Pearcy said that Blotzer could now only refer to himself as a "former member of RATT," as per the partnership agreement.

Blotzer's attorney later filed a request for reconsideration, and a hearing was held on January 23 in a downtown Los Angeles federal courtroom at which point the judge took the matter under submission. Less than two weeks later — on February 3 — U.S. District Judge Dean D. Pregerson issued an order denying Blotzer's request.

The RATT version featuring Pearcy, DeMartini, Croucier and later-period RATT guitarist Carlos Cavazo (ex-QUIET RIOT) made its first official return to the stage this past Saturday, February 11 at the Treasure Island Resort Casino in Welch, Minnesota.