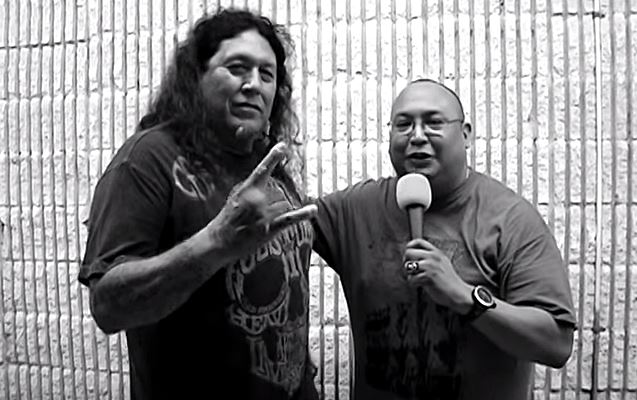 San Francisco Bay Area metallers TESTAMENT are working on the follow-up to 2012's "Dark Roots Of Earth" for a tentative early 2015 release.

During a brand new interview with "Robb's MetalWorks" conducted on August 23 in Corpus Christi, Texas, the band's frontman, Chuck Billy stated about the status of TESTAMENT's new disc (see video below): "We're writing the record right now. And hopefully it'll be out March next year. And it's gonna be some good stuff."

Speaking to Horns Up Rocks! at this year's Revolver Golden Gods in April, Billy commented on the musical direction of the next TESTAMENT album: "I never know what the final product is gonna be on any record we do — they all seem to be different — but I would love it if it kind of went back to what we did with [1999's] 'The Gathering'. Something about that record, to me, hit a nerve with new fans and fans in general. So I think if we could take that, what we were, especially with [bassist] Steve [DiGiorgio] being back, and that's the album Steve was on with us, go back to that style of writing and performing… But who knows?!"

TESTAMENT in January announced the departure of bassist Greg Christian and return of Steve DiGiorgio.