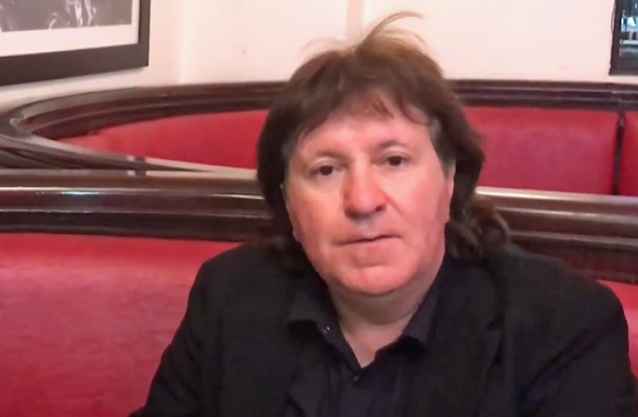 Simon Wright has confirmed that the Ronnie James Dio hologram will return to the road in 2019.

The legendary heavy metal singer died in 2010 at the age of 67 from stomach cancer. His hologram was created by a company called Eyeillusion and made its debut at the Wacken Open Air festival in August 2016 in front of more than 75,000 fans.

The Dio hologram production uses audio of Ronnie's live performances from throughout his career, with the DIO DISCIPLES band playing live, consisting of Wright on drums, Craig Goldy on guitar, and Scott Warren on keyboards, along with Bjorn Englen on bass. Also appearing with them are former JUDAS PRIEST singer Tim "Ripper" Owens and ex-LYNCH MOB frontman Oni Logan.

Speaking to former ANTHRAX singer Neil Turbin (for The Metal Voice) at the fourth annual "Bowl For Ronnie" celebrity bowling party, which took place this past Thursday, October 25 at PINZ Bowling Center in Studio City, California, Wright said that are plans for the Dio hologram to play more shows in 2019. But, he added: "It's gonna be different — it's gonna be a lot, lot better as far as the way it looks. It's the same team [putting it together], but they took it to the shop and they worked on it, and I've seen some of it, and it it looks really really cool; it looks almost real."

Asked if the Dio hologram will hit the U.S. at some point in 2019, Wright said: "They are in the process of deciding what's gonna be happening with that. But it will be definitely be [going] next year — that's what I've been told. I've been told to keep myself available."

Wright also defended DIO DISCIPLES' decision to go on the road with a hologram of Ronnie James Dio, saying that "there are so many people who didn't get a chance to see Ronnie live, so now they will get to see him as live as is possible. It's gonna be a big show, big production," he added. "It's gonna be good. But that's about all I can say about that."