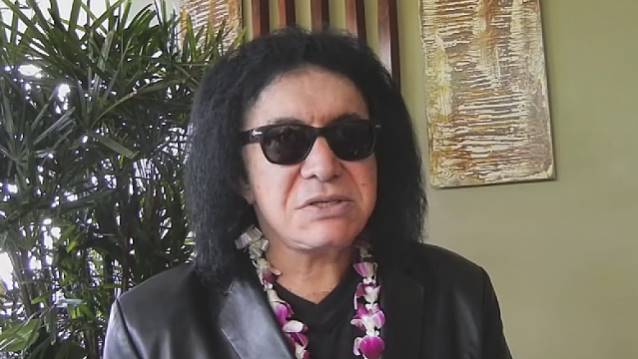 Earlier this week, KISS bassist/vocalist Gene Simmons was interviewed on "Elliot In The Morning", a morning radio talk show hosted by DJ Elliot Segal. You can listen to the chat in the YouTube clip below.

Asked about KISS' controversial announcement that no members of the band will be playing at the April 10 Rock And Roll Hall Of Fame induction ceremony in Brooklyn, Simmons said: "Look, the simple idea is, as soon as the Hall Of Fame called, and you know, we shrugged our shoulders and said, 'Thanks a lot, but we won a long time ago, because we have millions of fans around the world.' And when the Hall Of Fame called, we said, 'Terrific. We'll be proud to get up there and put on a full KISS show — Tommy [Thayer, guitar] and Eric [Singer, drums] and [former members] Peter [Criss, drums] and Ace [Frehley, guitar] and everybody. And they said, 'No, no. [We want] just Peter and Ace.' We said, 'Well, but Tommy and Eric have been in the band longer than the original lineup.' They said, 'Well, we're not gonna induct anybody else except Peter and Ace and Paul [Stanley, guitar/vocals] and Gene.' And we said, 'Oh. OK. Thanks very much.' We called Peter and Ace right away — Paul and I — [and we said], 'Hey, congratulations. The Hall Of Fame is gonna induct only the first members of the band. And we'll be proud to stand up there and accept the award with you, and then we're gonna go home. And by the way, both Ace and Peter were very gracious. [They said], 'Hey, great.' And [they said] we did a great thing. And then the media hoopla started."

He continued: "Look, the smallest dogs bark the loudest. So imagine this: you're being invited to a dinner where you're gonna be honored. And you say, 'Thank you very much.' And they say, 'Right. But we just want you to bring your very first girlfriend. The one you're with now, your wife, she can't come and we're not gonna talk to her.' Really?"

He added: "The vast majority of fans… If you've been a fan of KISS for 20 years, or 10 years, you don't know that there's 20 years before that. And by the way, the 20 years before that was not the original lineup. The original lineup was together for seven years. After that… We've had ten different lineups. So did THE EAGLES. THE EAGLES were inducted, all the members. So if the Rock And Roll Hall Of Fame is gonna be playing games, that's fine. I make a living, and that's okay, and we have millions of fans. I have nothing to complain about. And we're proudly gonna stand alongside Ace and Peter, who were equally as important as Paul and myself in starting something really unique that continues on. The world tour begins this summer, celebrating our 40th anniversary. But it's dishonorable to not include guys in the band who've been in the band longer than the original lineup by two and a half times."

During an appearance on the "Eddie Trunk Rocks" radio show on New York's Q104.3 FM, Frehley said that Stanley and Simmons "shot down doing any type of reunion with [original KISS drummer Peter Criss and me] — with makeup, without makeup," while Frehley himself ruled out performing alongside KISS' current lineup, saying, "I'm not gonna get on the stage with Tommy wearing my makeup. That's absurd."

Gene Simmons and Paul Stanley have chosen to have the rest of the current KISS lineup — guitarist Tommy Thayer and longtime drummer Eric Singer — dress up as Criss' and Frehley's respective "Spaceman" and "Catman" personas (designs owned by Simmons and Stanley).