Costa Rica-based melodic extreme metal band SIGHT OF EMPTINESS is putting the finishing touches on its second album, "Absolution of Humanity", tentatively due later in the year via an as-yet-undetermined record label. Singer Eduardo Chacón (a.k.a "fILTHY") states, "Last week, we listened to the final mix and let me tell ya, fellows, we are so freaking happy with the result, we can't believe our new baby is ready to give his 'first steps' out there. This new album represents a new page in the history of the band. Two new members debut in the studio; so much talent and fresh ideas they brought to the news tunes. We are talking about Rafa Castro (lead guitar) and Esteban Monestel (bass, backing vocals)."

He adds, "For the recording of 'Absolution of Humanity', we worked with Jerry Ramirez, who had previously worked with the band on the debut album 'Trust is a Disease' (2007). This time around we looked for a bigger, aggressive and dynamic sound, just as the new material required it. Drums are 100% acoustic, no 'triggers' or 'sound replacement' involved, looking for a more 'human' feeling and not a 'machine - plastic' sound. We moved to seven-string guitars, which is going to bring more punch and heaviness to the songs.

"This new album represent what SIGHT OF EMPTINESS is all about — aggressive riffs, melody, tight structures, and a fresh flavor of metal from Costa Rica that you won't find somewhere else."

"Wall of Pain", the latest video from SIGHT OF EMPTINESS, can be viewed below. The clip was filmed by Niclas Swanlund during SIGHT OF EMPTINESS' performance on the main stage at 2007's Bloodstock Open Air festival. 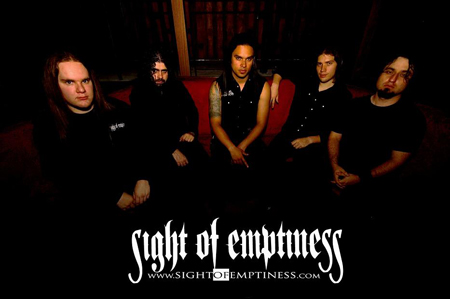