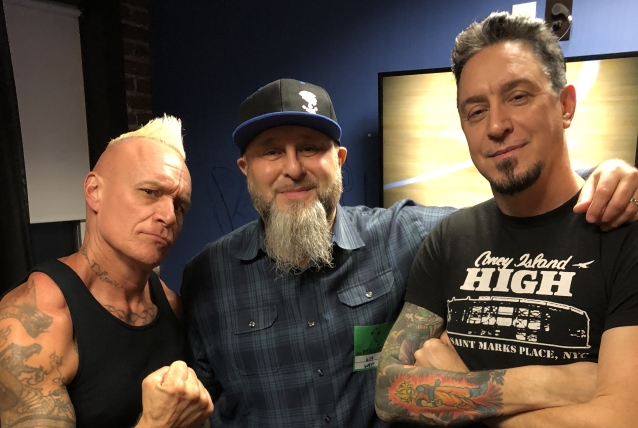 Work has commenced on a forthcoming autobiography from SICK OF IT ALL vocalist Lou Koller and guitarist Pete Koller, to be called "The Blood And The Sweat: The Story Of Sick Of It All's Koller Brothers". Former A&R man and author Howie Abrams ("Finding Joseph I: An Oral History Of H.R. From Bad Brains", "The Merciless Book of Metal Lists..." ) will be compiling the book along with the Kollers. Publishing is scheduled for fall 2019 by Post Hill Press.

In its thirty-third year as a band, SICK OF IT ALL recently released its twelfth album, "Wake The Sleeping Dragon!", to critical acclaim and fan adoration alike. With so many unique experiences under their belts, Lou and Pete, born and raised in Queens, New York, felt the time was right to tell their collective, as well as individual, stories.

This is not a tale of the streets and broken homes similar to that of, say, AGNOSTIC FRONT or CRO-MAGS. It is, however, a tremendous account of struggle and perseverance by any means necessary. One of working-class blood brothers reared on aggressive music; catching the wave of early New York City hardcore and riding it with an unparalleled anger and fury across the globe for nearly three and a half decades — together and separately enduring all of the turbulence which comes along with carrying the flag for disenfranchised youth anywhere and everywhere they were welcome... And even many places they were not.

Lou and Pete have encountered all of it side by side. Decisions each has made throughout their journey has had an effect on the other for better or worse. They've won some battles, and have lost many. In 1992, they were faced with the aftermath of a mass shooting in Massachusetts, carried out by a shooter wearing their tour shirt, and the misguided blame game which followed as their band name was plastered across mainstream media outlets worldwide.

Regardless, Lou and Pete Koller have achieved unparalleled success (in hardcore terms), and have taken the volatile sub-culture with them to locales previously assumed unfathomable. The brothers have made the hardcore family larger and more united like no other. To do so, there was certainly a lot of blood and sweat, but to this day, never any tears.