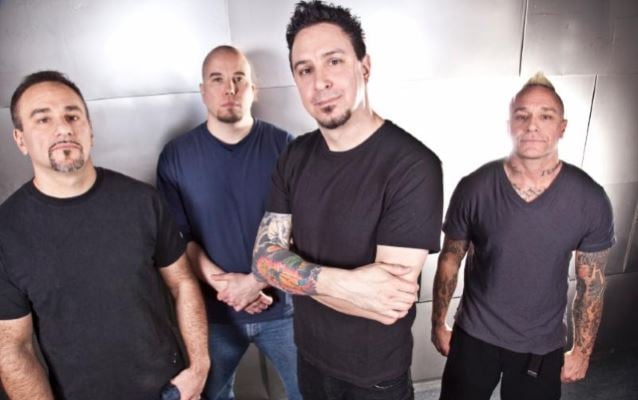 SROMaginc.com recently conducted an interview with bassist Craig Setari of New York hardcore legends SICK OF IT ALL. You can now listen to the chat below. A couple of excerpts follow (transcribed by BLABBERMOUTH.NET).

On how the hardcore scene has changed over the years:

Craig: "It used to be very 'do it yourself'; it was a real homegrown vibe, it was all your friends. The people that were there were there because they spent time, effort and their own money to be involved in this — meaning that they bought the records, they tracked the records down, they went to the shows, they drove, they started a band, they were active within the scene. Now you have a lot more casual fans, and there's nothing wrong with that; it doesn't have to be everybody's complete and total life. Now you get more exposure — everything gets more exposure — and, in a way, it's good because in the '80s, you'd get fans that would become lifelong fans [whereas] the changeover is a little quicker now; the people come in and out a little quicker now than they used to back in the '80s or even the '90s."

On how digital music downloading has affected SICK OF IT ALL's record sales:

Craig: "Yeah, that's a strange thing. Once the whole digital download thing happened, it kind of killed record sales quite a bit. But we've been fortunate, 'cause we were always a band that was primarily a live band. Our real proving ground and our main thing was touring and performing, so it hasn't had a terrible effect on us, although it has affected us somewhat. So, really, [for] us, it's about going on the road and playing and playing and playing. The records, all they do is give you an outlet to get new music out so you can go back on the road. If were a Top-40, hit-single-type band, it probably would have affected us worse. Or, actually, if we were even just a middle-of-the-road band that relied on record companies to continue our career, it would have affected us a lot. And although we dabbled in bigger record companies for a short period, we never sold ourselves to 'em in a heavy way, really, — we kind of just did things the old-school way — so we're still going strong."

SICK OF IT ALL's new album, "The Last Act Of Defiance", was released in Europe, Australia and New Zealand on September 29, and in North America on September 30 via Century Media. The eye-catching cover artwork for the CD was created by Ernie Parada, who has already designed posters, merchandise and album art for numerous bands and artists from the punk and hardcore scene such as HATEBREED, PROPAGANDHI, RANCID and THE GASLIGHT ANTHEM.